Echoenergia implements and operates electric energy generation projects from renewable sources. Established in 2017, the company’s administrative headquarters are located in São Paulo (Brazil), and its operational activities take place in Pernambuco, Ceará, Rio Grande do Norte, and Bahia, states from the Brazilian northeast. Currently, Echoenergia’s projects comprise 476 MW, which are distributed as follows: 346 MW for operations and 130 MW for implementation. 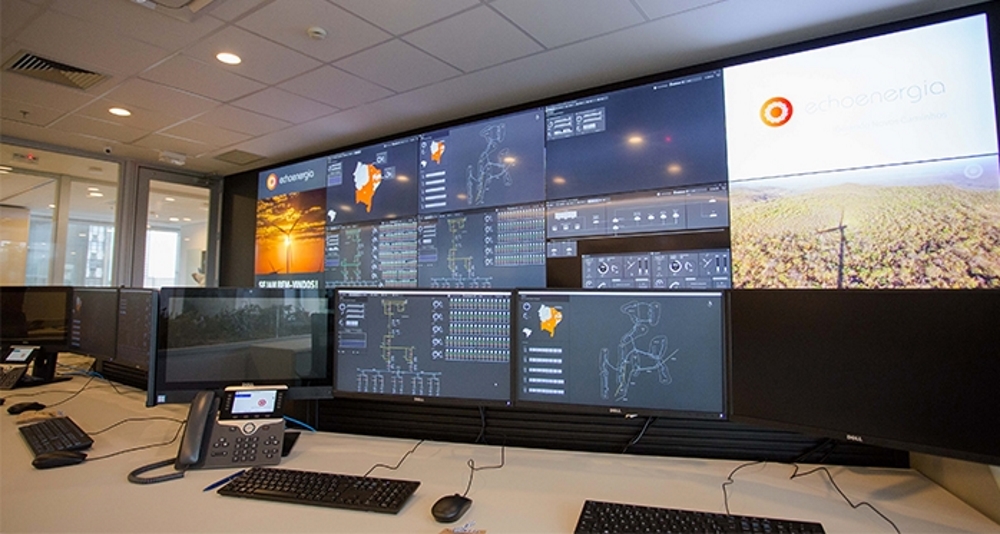 In order to remotely monitor and operate the São Clemente and Santa Rosália windfarm complexes (located in Pernambuco and Ceará respectively), Echoenergia has adopted the ea-Wind system for its Generation Operations Center in São Paulo, SP. The ea-Wind is a windfarm management system designed by Energia Automação, based on Elipse Power and Elipse Plant Manager framework, two platforms developed by Elipse Software.

The São Clemente Windfarm Complex is currently the largest wind park in Pernambuco. Located between Caetés, Capoeiras, Pedra, and Venturosa municipalities in the state’s backcountry, the enterprise comprises eight windfarms in a 370-thousand-hectare area, with 126 wind turbines and 216-MW installed capacity. 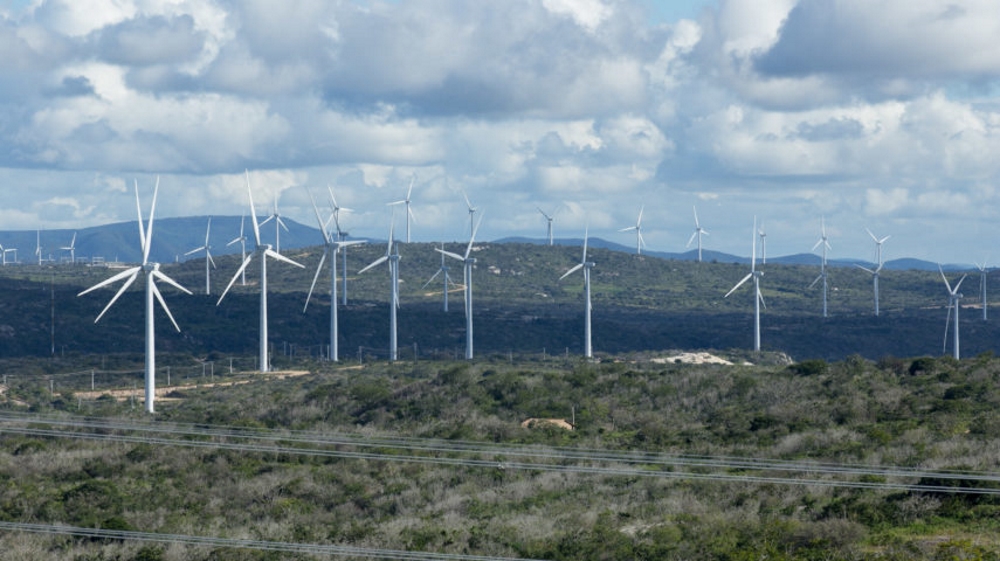 The Santa Rosália Windfarm Complex is located at the Ibiapaba Mountains, in Tianguá municipality in Ceará. Comprising five windfarms with 77 wind turbines altogether, the complex has 130-MW installed capacity in a nine-thousand-hectare area. Both complexes have been in Echoenergia’s portfolio since April 2017.

Both of Echoenergia’s windfarm complexes have an Elipse Getaway module installed in ADVANTEC ECU-4784H industrial servers, and they are responsible for collecting and providing the GOC with data from windfarms, turbines, and substations. Data was acquired from the IEDs via MMS protocol, as set up by IEC61850 regulation, and from the windfarms and their turbines via communication with an OPC server. Data was distributed to the GOC via IEC870-5-104 protocol.

Elipse Power’s architecture was designed for high availability. There are two virtual servers: The first one works on VMWARE technology over a DELL hardware pool located in a datacenter at the GOC; the other one has the same capacity, but is hosted on an AMAZON WEB SERVICES cloud instead. Both servers work in contingency (Hot-Standby), that is, if the main active server fails, the one in standby will immediately take over in order to avoid any system outage.

These two servers communicate with the complexes’ Elipse Getaway modules via IEC 60870-5-104 protocol, which was chosen due to its ability to better compact message exchanges via data link. All network connections taking place between the windfarms, the GOC, and the AMAZON cloud are based on redundant VPN tunnels, in order to maintain additional levels of redundancy.

In order to record data from the generation process, the Elipse Plant Manager (EPM) system was installed in another server, also in the AMAZON WEB SERVICES cloud. Information generated by the software is stored in an SQL Server database running directly under the relational database platform, such as AMAZON’s RDS, which will improve its growth flexibility, management, redundancy, and performance.

The GOC comprises three operational stations, equipped with two individual monitors and a 10- FullHD-monitor video wall to optimize the complexes’ supervision. These three virtual stations were also developed with VMWARE/DELL technology, thus mitigating possible local failures and consequently increasing reliability in the environment as a whole.

The ea-Wind is a system designed with high visual performance that allows integrating wind turbines and IEDs from different vendors into a single environment; with it, Echoenergia is able to supervise and analyze electric BOP as well as the windfarms that compose the two complexes.

State-of-the-art displays and charts, alongside a set of objects developed exclusively for windfarm management, allowed the design of customized screens to suit the client’s needs. The ea-Wind system comprises two modules: ea-Wind SCADA (based on Elipse Power), which is responsible for acquiring and controlling data in real time,  and  ea-Wind Analyze (based on Elipse Power + EPM), which is responsible for storing data and analyzing information/indicators.

Developed with Elipse Power’s framework, the ea-Wind SCADA module allows monitoring and controlling the electric magnitudes and equipment that compose Santa Rosália and São Clemente windfarm complexes. Its screens and commands allow operators to check the total amount of energy generated, wind speed, reactive power, and the number of wind turbines in production and available.

The Elipse Power system also allows monitoring and controlling the windfarms’ turbines individually: It tracks their generated and estimated energy, their nacelles’ direction, revolutions per minute, wind speed, reactive power, and local temperature, among other significant data for evaluating costs.

Another important feature to be monitored here is availability, in order to evaluate the equipment’s operational conditions: When a turbine malfunctions, the software will display it in red. Individual wind turbines can also be turned on/off or restarted via Elipse Power.

Each complex comprises a substation and a group of windfarms, which are all displayed by the software as a single-line diagram. This diagram allows monitoring its electric magnitudes (voltage, current, power) and issuing the necessary commands to open/close the sectionalizers. 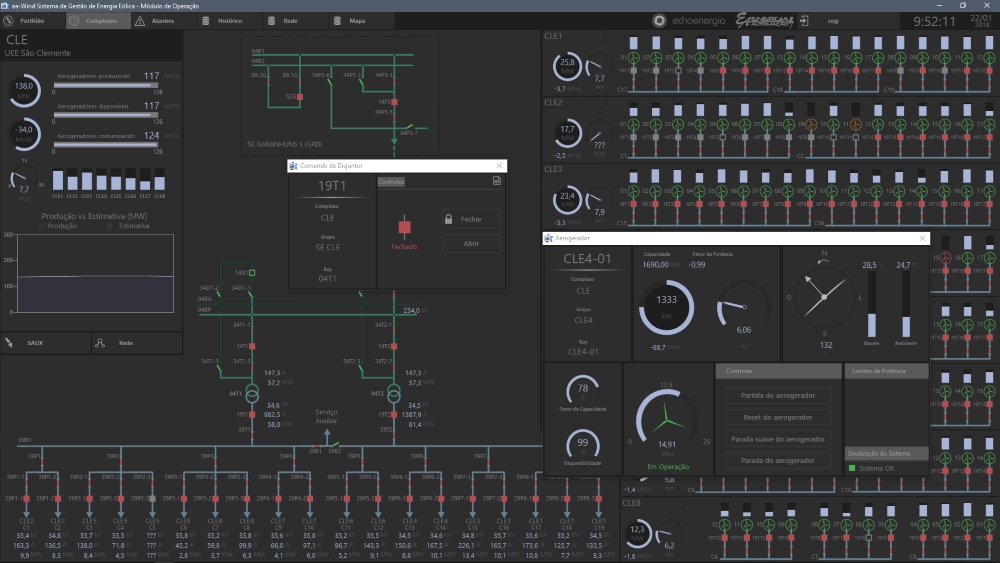 The complexes are represented geographically by Elipse Power next to its main indicators. This allows spotting any correlation between production and location very quickly and very easily. Windfarms and turbines are individually represented on the map by graphic objects.

Faulty wind turbines are displayed in red on the map; this helps operators decide where to send maintenance teams after an occurrence or for preventive technical support.

Developed with Elipse Power’s and Elipse Plant Manager’s frameworks, the ea-wind Analyze module is an analysis tool for the wind power generation process that works within a period stipulated by the operator. With EPM, the system stores data, performs specific calculations, and generates indicators. With Elipse Power, the solution features screens with advanced charts and displays that optimize the interpretation of trends from the data.

The ea-Wind Analyze’s screens display the amount of energy generated by the complex and its windfarms, as well as the number of wind turbines that are available, producing, and in communication with Elipse’s systems. Additionally, the solution provides a series of charts that compare the generated energy to the estimated energy in the complexes as a whole and in their windfarms individually.

The module also features other charts, where the energy generated by the complex can be compared to the local wind speed, and where the substation’s voltages and currents can be monitored. These mixed levels of analysis help to better understand how the complexes operate and what kind of corrective measures must be adopted to improve their indicators. 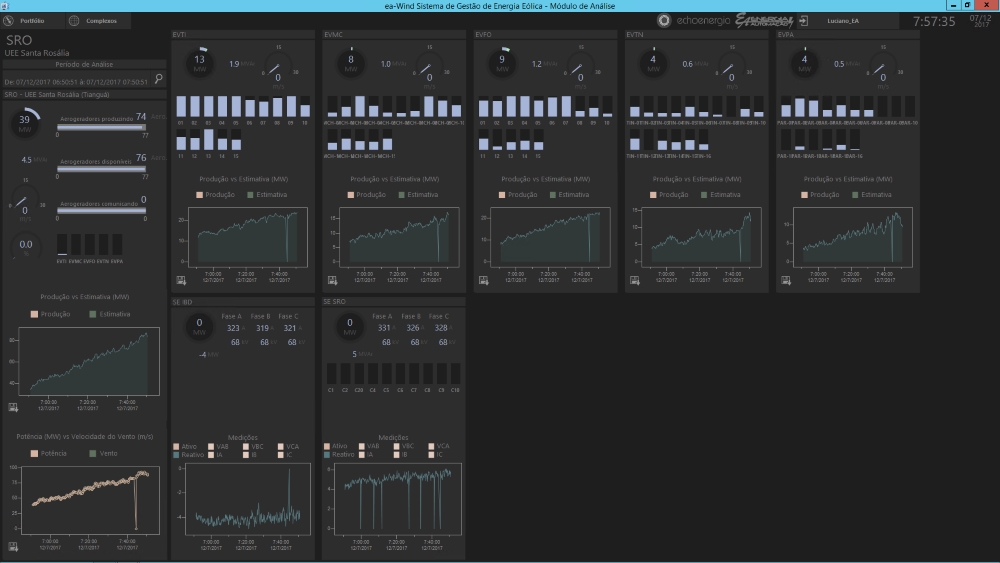 A key component in wind generation, each wind turbine in the complexes is monitored by the ea-Wind Analyze via a graphic interface dedicated to performance analysis. The interface detects the average electric magnitudes in each turbine, such as active and reactive power and the power factor. 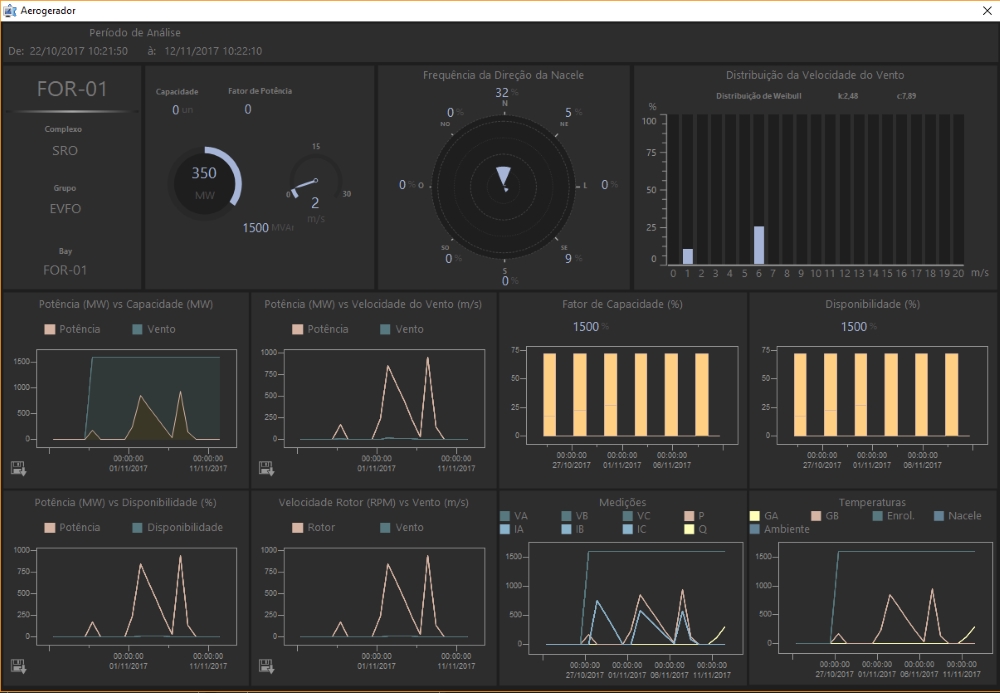 Charts crosscheck generated power against production capacity, active power against wind speed, and wind speed against the turbine’s revolutions per minute. Bar charts placed side by side contrast each wind turbine’s current output (power factor) with the equipment’s usage availability as reported by its vendor.

Wind speed frequency, as defined by Weibull Distribution calculations, is also monitored by Elipse’s platforms. The platforms also allow using a compass rose to check where the wind turbine was pointing to, as well as the temperatures measured in the winding, nacelles, generators, and the environment.

All the analyses performed by the ea-Wind Analyze module are measured within a time frame established by the operator, unlike the ea-Wind SCADA module, which controls and supervises data in real time.

According to Alexsandro Martins, Echoenergia’s Operations Manager, the company has opted for the Elipse platforms to automate its wind power complexes due to their versatility: Both platforms are able to connect to several different supervisory and control systems. Additionally, the platforms’ high-performing screens were also decisive for choosing Elipse Software.

“Both Elipse Power and EPM allow us to monitor and control wind turbines produced by different vendors but with the same standards for design and programing. Thus, these two platforms allow us to control the two complexes at the same time, which saves us time and money,” he said.

Among the main benefits Elipse Power and EPM have brought to Echoenergia’s wind power complexes, we highlight the following: