Light Energia is a company of the Light Group acting in the segments of distribution, generation, and commercialization of energy. With 868 MW capacity, Light’s generation complex comprises five regular hydro power plants and one small hydro power plant in the states of Rio de Janeiro and São Paulo, in Brazil. They are: Fontes Nova, Nilo Peçanha and Pereira Passos HPPs and Lajes SHPP, which make up the Lajes Complex in Piraí-RJ; Ilha dos Pombos HPP in Carmo-RJ; and Santa Branca HPP in Santa Branca-SP.

In addition to the power plants of Light Energia, the Light Group generation complex also includes Paracambi SHPP, with a grand total of 893 MW capacity. Finally, the enterprise also has two lifting stations: Santa Cecília (in Barra do Piraí) and Vigário (in Piraí). These stations allow transposing part of the water in Paraíba do Sul river to the Guandu river basin, thus ensuring the water supply of Rio de Janeiro’s metropolitan area.

Roughly 96% of the water consumed by the city of Rio de Janeiro and Baixada Fluminense passes through the plants and reservoirs of Lajes Complex. From this grand total, nearly 5% are special class waters from Lajes reservoir, specially withdrawn by the water distributor, which require only a chlorination process in order to be fit for consumption.

Developed by Elipse Software, Elipse Power is the platform adopted by Light to monitor these power plants, especially due to its being easily configurable for creating operational screens (HMI – Human Machine Interface). Another factor that played heavily in Light’s choice was Elipse’s quickly accessible support and training program.

The systems installed at Nilo Peçanha and Fontes Nova HPPs employ an architecture where Elipse Power is executed from two servers in hot standby mode that monitor and control their plants. This architecture is supported by a LAN network infrastructure with double-ring (Nilo Peçanha HPP) and double-star (Fontes Nova HPP) topologies.

The new features of the PLCs used by Light allow connection to more than one host simultaneously, thus working as a communication hub gateway. Then, the Pereira Passos and Santa Branca HPPs, as well as the Vigário and Santa Cecília lifting stations, were implemented to use a single Elipse server in standalone mode, and all of them use LAN network double-ring or double-star topology.

Currently, the Elipse platform works at the Lajes Complex plants (Fontes Nova, Nilo Peçanha and Pereira Passos HPPs, and also Lajes SHPP). In 2021, Light plans to expand the application to Santa Branca HPP and Santa Cecília and Vigário lifting stations. The supervisory software should be introduced to Ilha dos Pombos HPP by the end of the same year, and in 2022 the whole project will have been implemented there too.

With Elipse Power, it is possible to monitor the opening of floodgates, the generated power, and the water flow of rivers being pumped from plants to reservoirs and vice versa (spilled outflow). It also allows checking volume and height of the water falling over generators, as well as water levels found upstream and downstream, before and after the HPPs’ barrage. 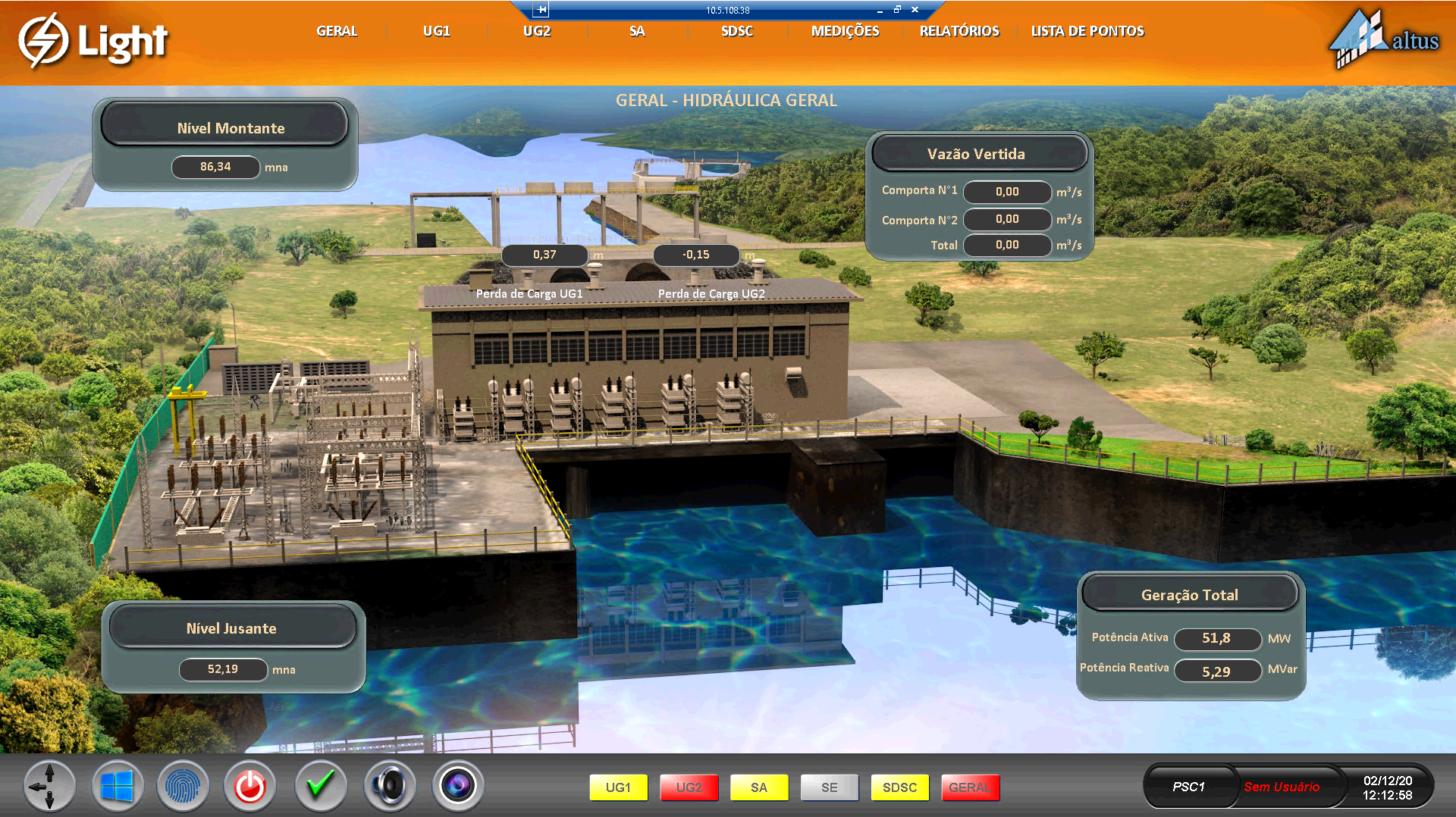 With Elipse Power, it is possible to monitor the power, voltage, and current values generated by the HPPs, as well as turbines rotation and the level of floodgates opening at each generating units (GU). It is also possible to check the current states of generators, pumps, and valves where the turbines’ cooling water flows, in order to avoid overheating them. 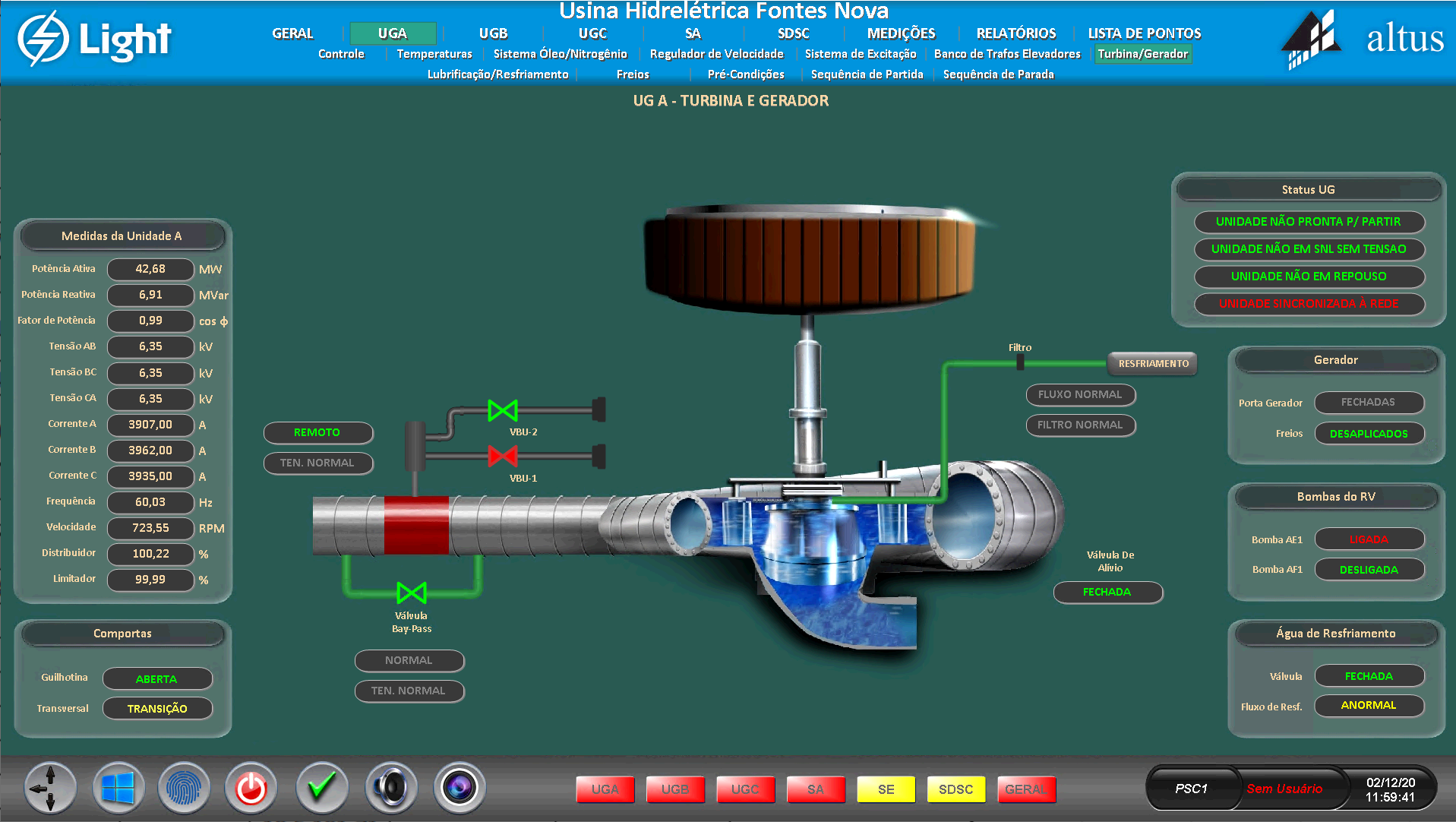 The software by Elipse also allows visualizing the plants’ single-line diagrams. On them, operators can open/close sectionalizers and breakers in order to set up the bus through which the generator will transmit energy to the substation it is interconnected to. Additionally, it allows controlling the active power to be generated, as well as reactive power or voltage to be added to the GU’s excitation system. It also allows re-arming protection relays and setting up the opening limit of the gate where water comes in contact with the turbines. 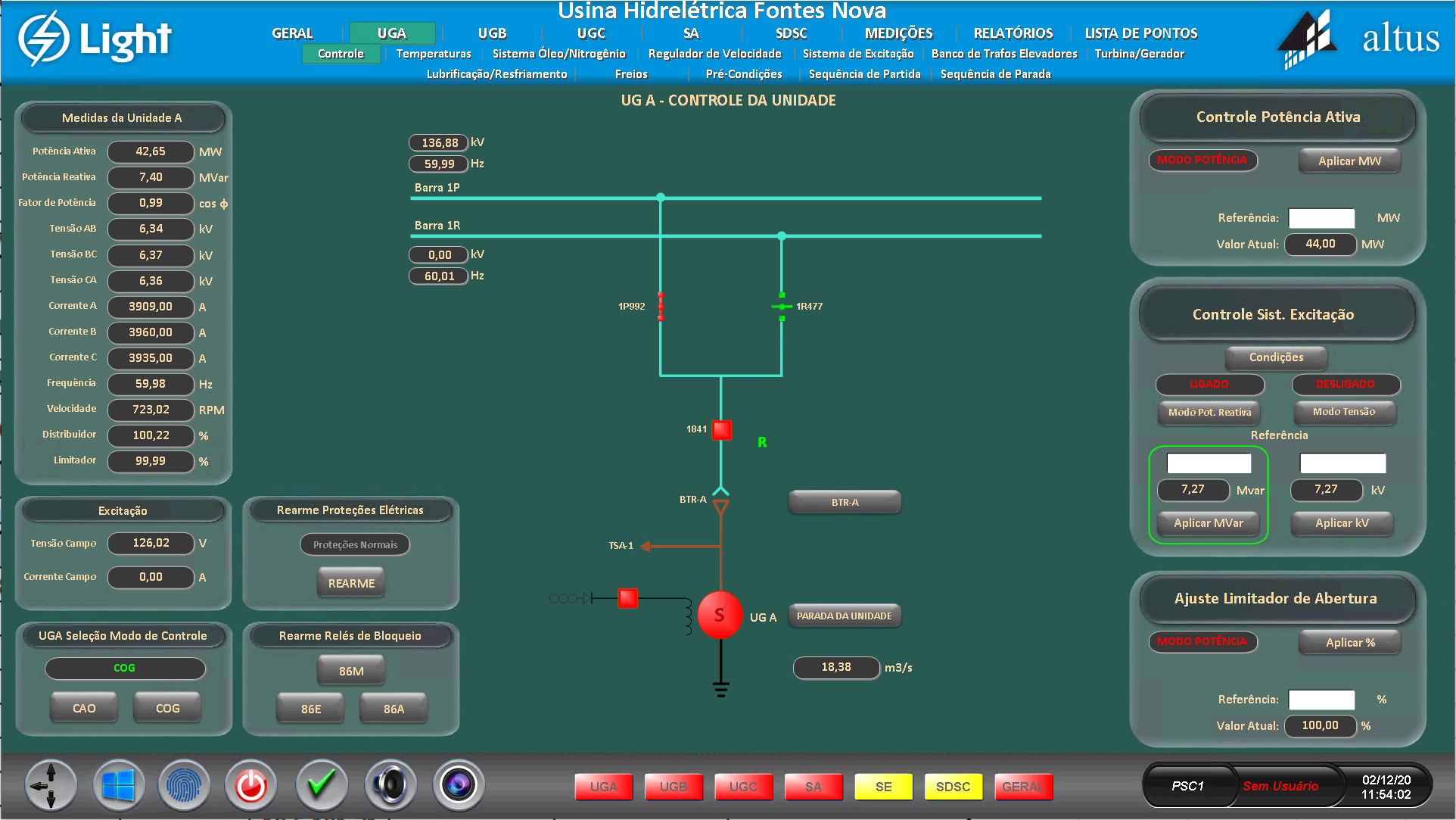 Elipse Power is also used as the local SCADA system at the valves room. Elipse Lite was chosen for the Barrage Alarm System; this technology issues an audible sign that warns neighbors of the barrage to evacuate the area in case of breakage and flooding risks. Currently, this alarms system is working only at Ilha dos Pombos HPP, but it is expected to be fully operational at Santa Branca HPP and the Lajes Complex by the end of 2021.

The Hydrologic Monitoring System also employs Elipse Power. With it, operators can check the level of water in the plants’ reservoirs, as well as the accumulated volume of rainwater in  hydrology wells. Instrumental to the implantation of this system are the following companies: Altus Automation Systems, Energia Automation, Hobeco, TECAL, and ICSA.

Altus AS is responsible for implementing the system used in the hydro power plants and lifting stations. The barrage alarm system was applied by Energia Automation alongside Hobeco, and later expanded by TECAL. Last but not least, the hydrologic monitoring system was developed by ICSA.

According to José Monteiro Lysandro Júnior, Coordinator of Light Energia’s Engineering Management’s Automation Team, since the staff was already familiar with Elipse E3, the company didn’t hesitate to migrate to Elipse Power. Another factor at play in their choice is the fact that Elipse Software is a Brazilian company, which ensured easier access to its technical support and trainings.

“We opted for Elipse Power because we were already used to working with Elipse E3, another one of the company’s solutions, in our hydro power plants’ local supervisory system, so the familiarity of Light Energia’s staff with this technology was a huge selling point,” said Lysandro Júnior.

Check out the list below for other important benefits obtained by Light Energia with Elipse Power in this application.