Grupo RBS is an outstanding multimedia communication company in Brazil and the largest Rede Globo subsidiary. Leading the market in the state of Rio Grande do Sul (in the southern tip of the country), RBS produces content and entertainment for radio, TV, print newspapers, and digital platforms. Its radio stations portfolio features five of the more important radio stations in the South.

The audience-share leader is Rádio Gaúcha, operating both at FM 93.7 and AM 600. Its programming focuses on sports broadcasting and breaking news, keeping its listeners updated on news coverage from their home state, from Brazil, and from abroad. The Atlântida Network covers the majority of Rio Grande do Sul and Santa Catarina states, and is the largest youth-oriented FM station in the southern region.

102.3 FM station broadcasts jazz, pop rock, and blues, among other music genres, both classic and modern, and aims at reaching for a varied audience, from different age ranges. 92 FM station, on the other hand, invests in shows with funny radio personalities who are very active in social media, in a light-hearted programming filled with current top tracks.

For a wide radio signal coverage, broadcasting towers are located at the top of the hills in Porto Alegre, facing the city and nearby area. These towers are 10 km away from corporate headquarters, which made in-site monitoring very difficult for the maintenance staff: in case of failure, a technician would take at least 20 minutes to get to them.

With Elipse E3, the software solution developed by Elipse Software, RBS can now monitor the radio transmitters of Rádio Gaúcha, Atlântida, 92.1, and 102.3 in real time, via a Tech Center, and no longer requires staff to go to the towers personally to check for any malfunctions. Therefore, the response time to acknowledge, analyze, and solve any events that would compromise radio broadcasting of any of these stations has been greatly reduced.

Figure 1. Tech Center from where Elipse screens are accessed

The initial screen of the Elipse E3-based application shows an overview of the broadcasting devices of all Grupo RBS’s FM radio stations. This screen displays the transmitters’ power, details of the signal distribution link from studio to the broadcasting site, rooms’ temperatures, and detailed information on energy (for example, whether it’s being supplied by the energy supplier or by a generator group, and what the phase voltage is). Additionally, the software shows a field that details all active and unacknowledged alarms in the system. 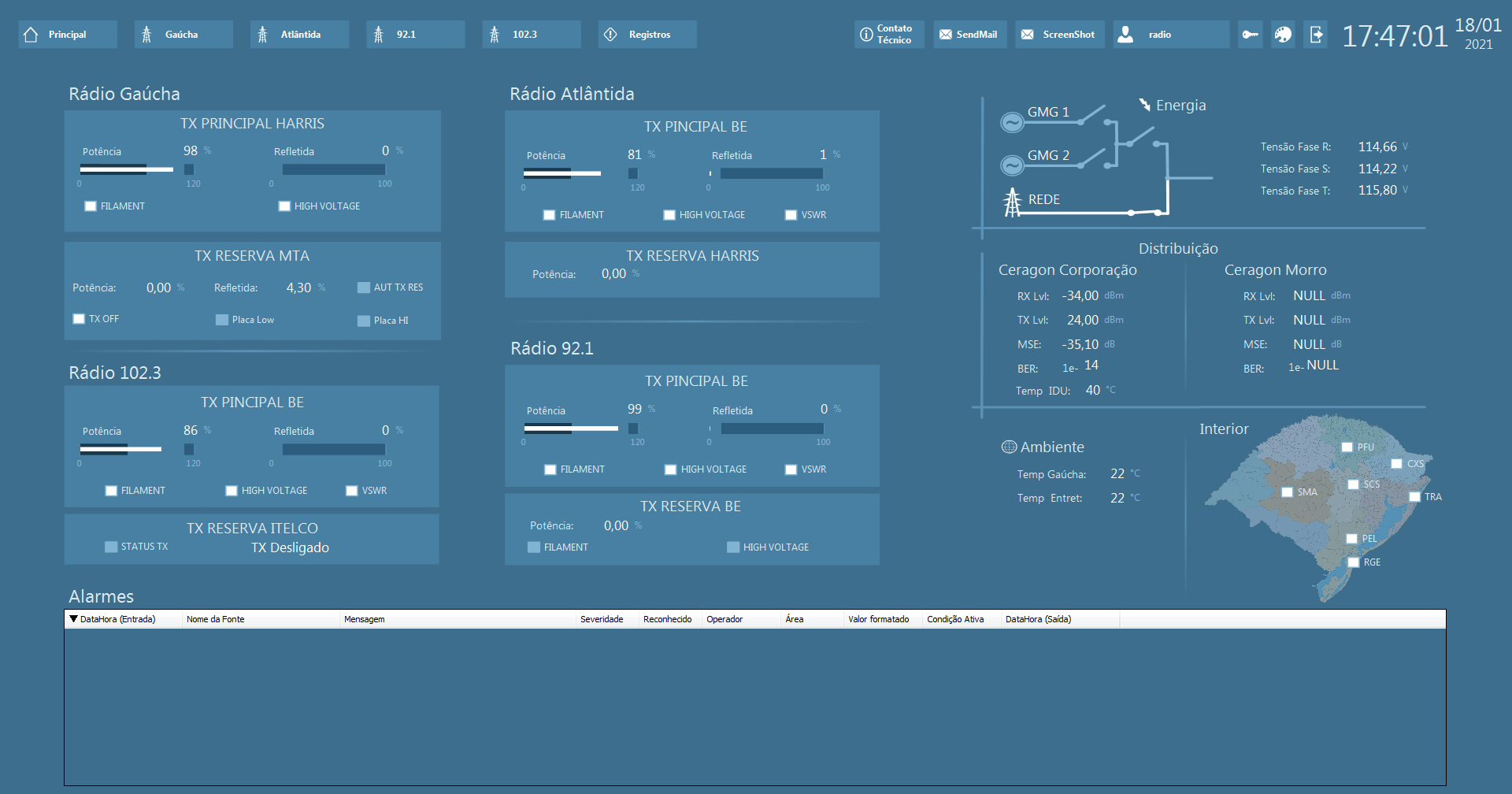 To reinforce this control, each monitored radio station is represented by an exclusive screen. On this screen, operators can view the signal’s flow diagram from start to finish, until it reaches the broadcasting tower, with detailed information about transmitters and other devices. The screen also displays data regarding the back-up transmitters, which can be accessed via remote control. Finally, it also shows signal reception quality, that is, information about how the signal is being received by end-users. 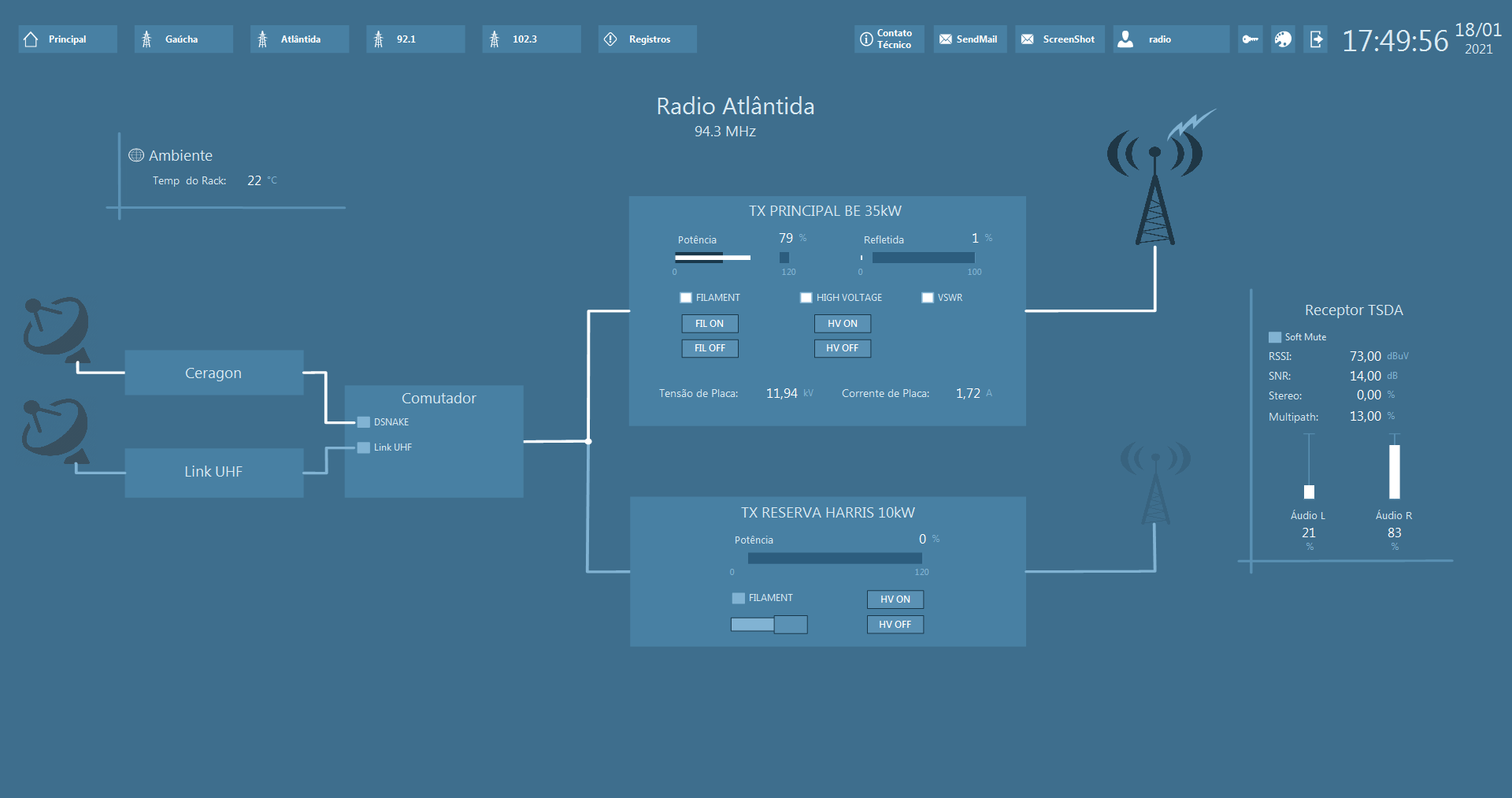 Last but not least, Elipse E3 monitors the history of the events, alarms, and remote controls that are stored in an SQL data base. These can be filtered by date and/or keyword, and also exported to PDF or Excel. The E3 application also allows sending reports or print screens via e-mail. 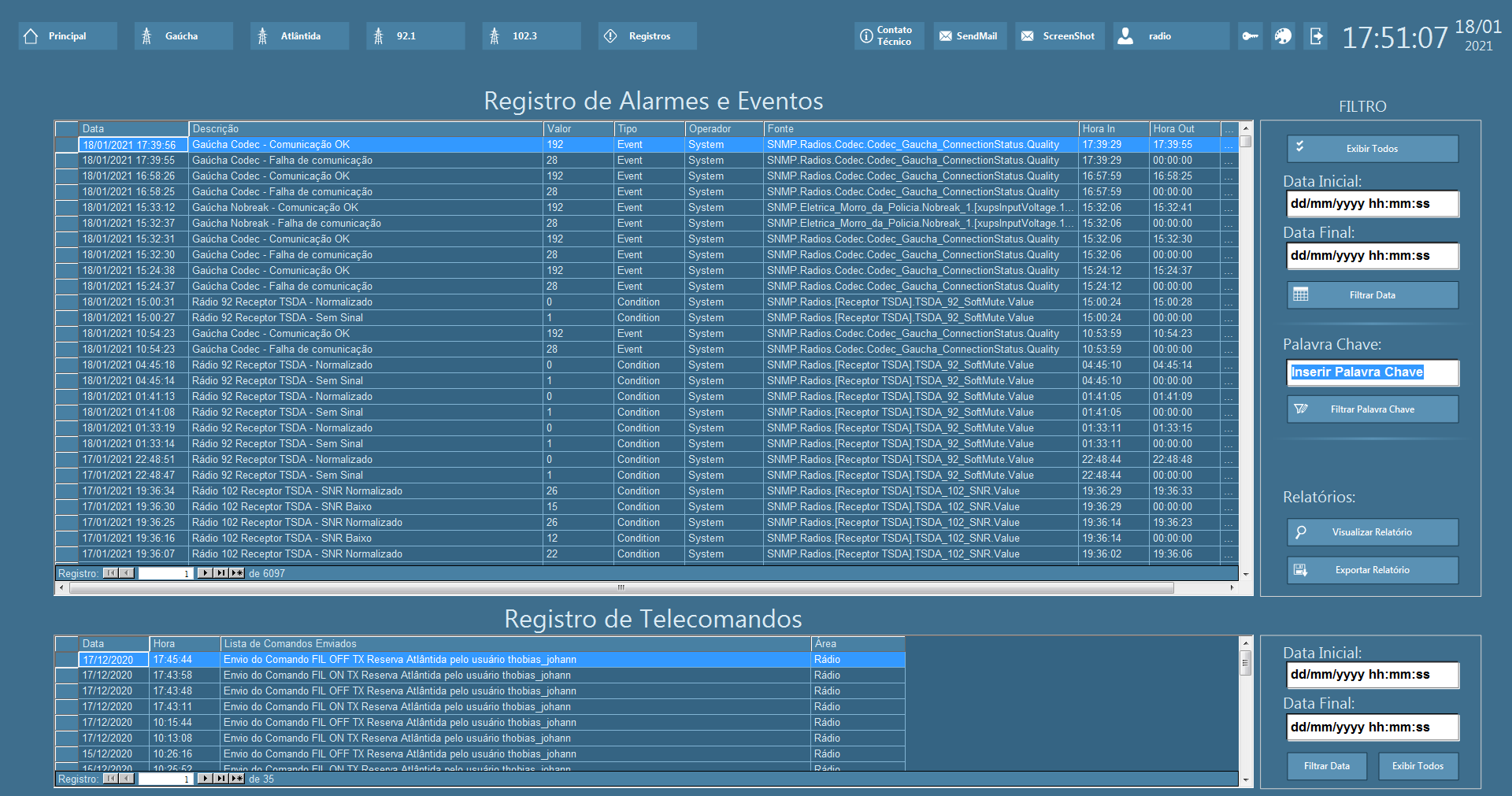 A telemetry device by Broadcast Tools called Sentinel 16, developed for broadcasting companies, was used in this project to collect the information from transmitters. The device allows collecting audio data, statuses, and voltage levels, and also sending remote controls. The information can be accessed remotely via SNMP protocol, thus a SNMP driver was used with Elipse E3 to integrate the software to the transmitters.

“More celerity to acknowledge, to analyze, and to respond to any malfunctions in the system”. According to Thobias E. Johann, Rádio Gaúcha’s Broadcast Maintenance Engineer, this is the main benefit his company got in return when choosing the remote control provided by the Elipse platform.

“With the new monitoring system, our control is more agile, and we are able to respond to occurrences in the radio broadcast system much faster,” he said.

When questioned as to why the company has decided to adopt the Elipse technology, he answered: “We’ve opted for Elipse E3 because the software is highly customizable, scalable, and reliable. In addition to that, it’s already being used by other areas in Grupo RBS (TV and electric energy), with satisfactory results,” he said.

Check out the list below for other important benefits obtained by RBS with the Elipse solutions: