One of the largest SCADA applications in the Brazilian electric sector, with over 700,000 points, now has a new system with a simpler, more intuitive high-performance interface

Over the past decades, the aviation industry has made great strides in cockpit design, making pilotage increasingly safer. The transition from traditional analog meters to large LCD screens has simplified the way airplanes are operated and flown, allowing pilots to concentrate only in essential information.

Inspired by this example, CPFL Renováveis has decided to modernize all its SCADA systems, in order to maximize the generation of electric energy and reduce costs with assets maintenance and operation. To do so, the company made important changes to its operations center.

Before the upgrade, CPFL controled its plants via two different operations center. Based in Jundiaí, in the countryside of the state of São Paulo, the first center allowed controlling its small hydro power plants (SHPPs), solar plants, and biomass thermoelectric power plants; the second center, in Fortaleza, Ceará (Northeastern Brazil), controled the wind power complexes, transmission lines, and substations.

After the upgrade, the SHPPs, as well as the solar and wind power plants, had their control centralized at the Integrated Operations Center (IOC), in Jundiaí (SP). This in turn has allowed the company to centralize its activities and obtain better results, increasing their operational efficiency in 35%.

Another change adopted by the company took place in its SCADA systems. Before the upgrade, the system used in the SHPPs comprised several different platforms, each with its own different interface and operational intelligence. Because there were multiple solutions coexisting side by side, each plant required having 20 to 30 screens installed per unit, which in turn generated a great amount of visual pollution due to the information overload.

As for the windfarms, each wind park complex worked with a different SCADA software system. These systems were operated centrally in Fortaleza, but also locally via single applications installed at the plants. However, central control was restricted due to the protocol in use (Windows RDP) and to unfeasible access to the same server from two distant points (central and local).

Because of this scenario, CPFL used to control its windfarms either locally or remotely through different systems, one for each wind park. This caused CPFL Renováveis to replace all these systems with only two platforms, both from Elipse Software. We should point out that this application is one of the largest in the Brazilian electric sector, with over 700,000 monitored points.

The two platforms being employed by this application are: Elipse E3, which is used for monitoring and controlling the SHPPs, and Elipse Power Renewable, which is used for windfarms and solar plants. The concept behind it was to standardize and simplify the applications, which were developed for high performance to improve situational awareness, thus streamlining the access to information. 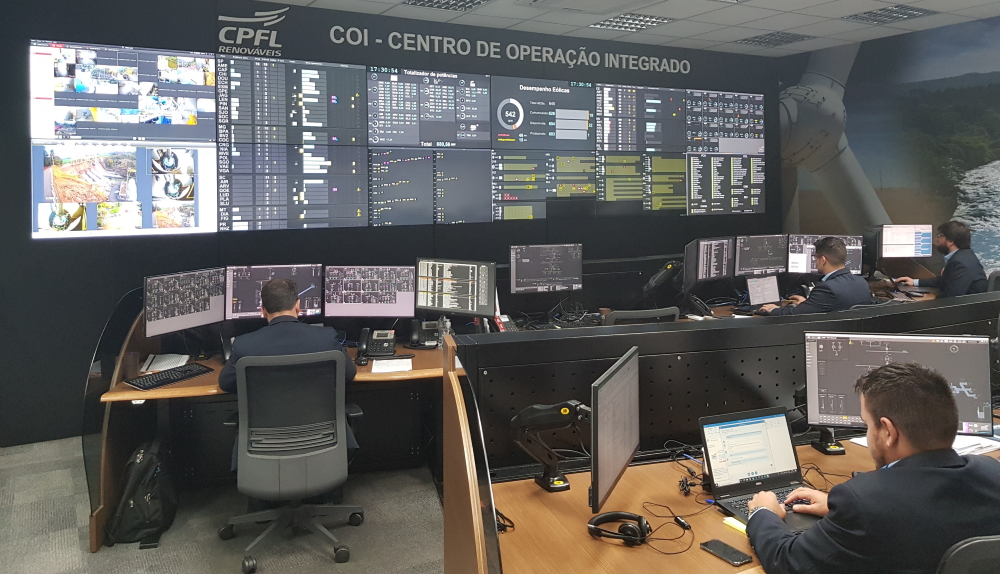 Managed by the Operation and Maintenance (O&M) department, the IOC is one of the main projects in the “Move Forward Program”. Launched in 2017, the program concentrates over 20 projects for higher efficiency and enhanced performance in power generation. The integration and centralization of all operations into a single IOC, in addition to the quality and standardization brought by the Elipse SCADA applications, allowed CPFL Renováveis to achieve significant economic benefits, according to the company’s O&M Superintendent, Flávio Ribeiro.

“We had two different operations center, and none of them had standardized systems or a good human-machine interface. Now, with a single center and friendlier, smarter systems, we can maximize revenues and increase efficiency while improving synergy,” said Ribeiro.

CPFL Renováveis is the leading company in Brazil in the market of energy generated from renewable sources. Its portfolio has 94 generation assets from four different types of sources: wind power, SHPPs, biomass thermoelectric power plants, and solar energy. These assets total more than 2.1 GW of installed capacity in 58 Brazilian municipalities in eight different states. The company also has its stocks listed at BM&Fbovespa’s Novo Mercado, the highest level of corporate governance since 2013. 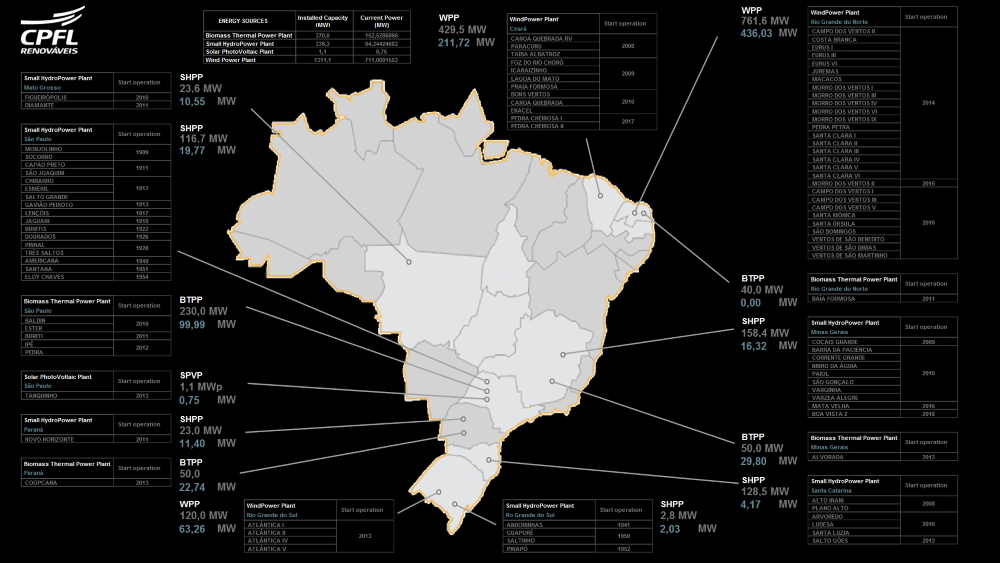 After the system upgrade, the IOC has operated with only three desks for 40 SHPPs, 16 wind complexes (with 645 wind turbines), and one solar plant. In addition to Elipse E3 and Elipse Power Renewable, CPFL Renováveis also employs two other Elipse platforms. With Elipse Gateway, the company has direct communication with the NSO (National System Operator), the regulatory agency for all operations in the National Network System.

The other platform employed in this project is Elipse Plant Manager (EPM), which is used for automatically calculating different efficiency indicators and plant availability via Python-based algorithms. With this platform, the theoretical expected power is calculated according to the power curve indicated by the manufacturers of the generating unit. Therefore, lost power indicators are generated due to inefficiency or outages in plant generators (unavailability).

Both Elipse E3 and Elipse Power Renewable, the platforms comprising the new SCADA system of CPFL Renováveis, were configured with high-performance interfaces, a concept that strives for combining simplicity and efficiency. Thus, instead of a detailed layout that represented every single aspect in the project, which may cause information overload, the new system’s interfaces favor showing only relevant points in each case, thus facilitating diagnoses reading and operations execution.

No detail is lost, which contributes to reducing the user’s response time to atypical situations, and therefore increases the operation’s availability and efficiency. Additionally, the Elipse platforms allow generating PRJ files. With these, every change made in the IOC automatically migrates to the local operations station. Thus, all screens and databases of the IOC application are identical to the ones found locally at the plants.

As for the wind park SCADA systems, Elipse Power Renewable operates on 100% of the points, supervising the signaled power at the distribution transformers, feeders, sub parks, and wind turbines, as well as the output voltage at the transmission line in each park. It also displays the details about the alarms signaled with each complex, and their degree of criticality is indicated by their colors (yellow = normal; orange = urgent; magenta = trip or shutdown). The same color scheme was employed in the alarms indicated by Elipse E3 in the SHPPs. 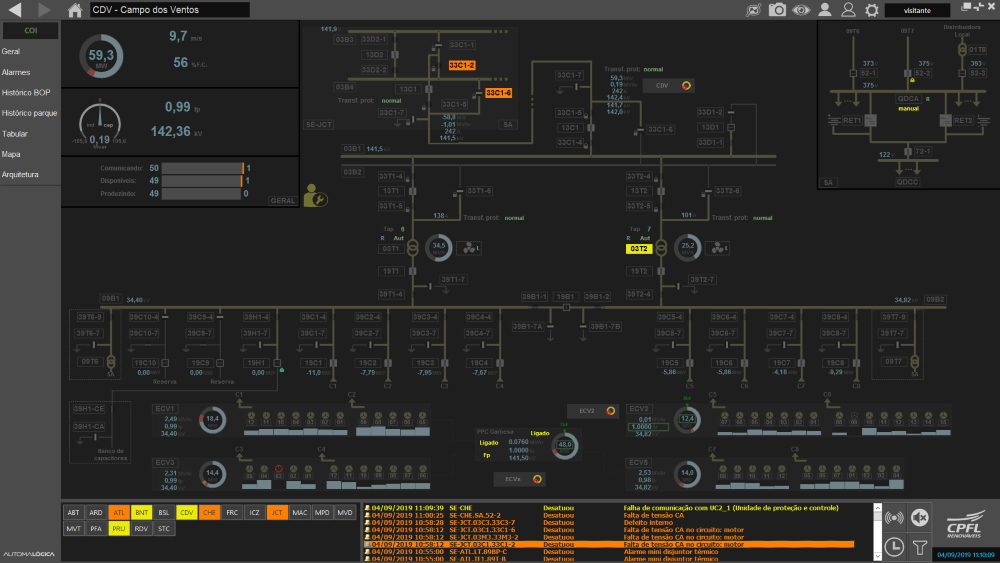 In the case of wind turbines, the solution allows monitoring voltage factors, rotation and wind speed, active and estimated voltage (according to manufacturer), spinner temperature, rotor, generator, stator, nacelle, and transformer, among other components, in addition to alarms and their communication period, either available or generating energy. The application is integrated to MS Power BI (Microsoft Power Business Intelligence), which is a tool for displaying information via panels and dashboards widely used by CPFL Renováveis. 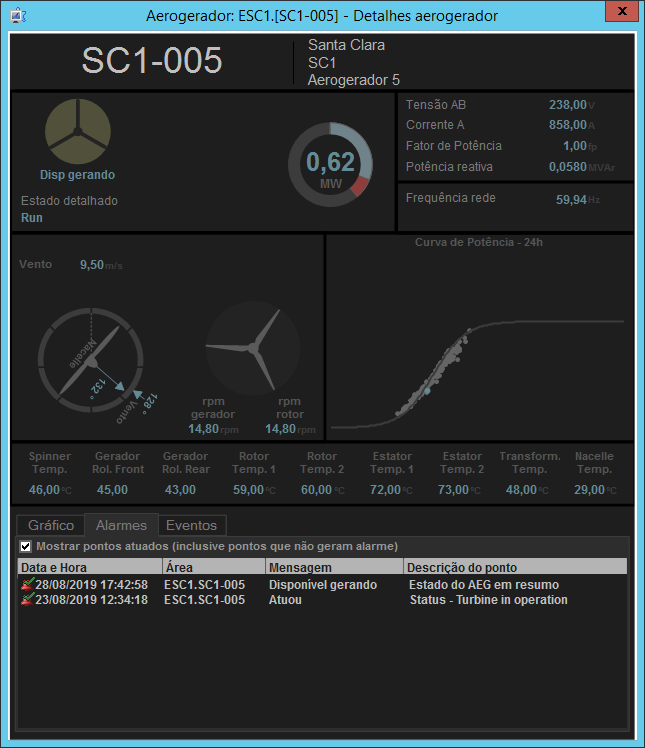 Elipse Power Renewable also allows verifying why a wind plant has shut down, with a tool designed for categorizing the statuses of generating units. Once the reason was identified, the operator can document the event, leaving their critical review at the local historic and the database.

Additionally, the operator can decide whether they maintain or change the shutdown’s category; the event can share different categories, and the same categories can have more than one event. With this information in hand, operators can generate a complete report, fully integrated to the system, through which it’s possible to evaluate accurate data on the generating units.

With Elipse E3, CPFL Renováveis is able to monitor all its SHPPs, as well as to access current and maximum voltage, loads served by auxiliary services, upstream and downstream levels, drainage and reservoir levels, statuses of generating units, turbine speed, and the alarms assigned to each plant. The software also allows turning switchers and generating units on and off, and supervising their individual cooling and lubrication systems. 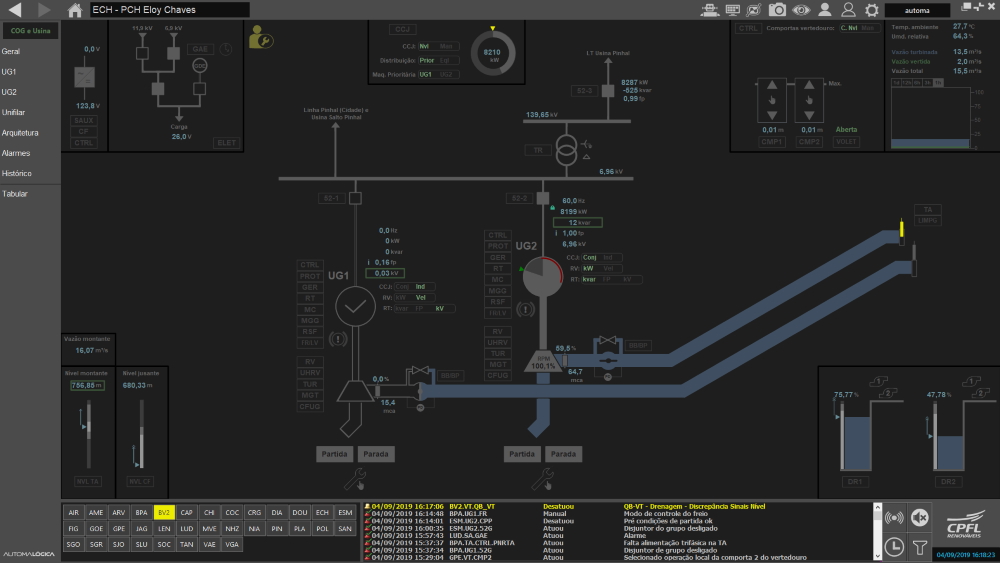 All features and data from Elipse E3 and Elipse Power Renewable can be accessed via smartphone with an app by Automalógica Sistemas para Automação, the company specialized in developing, trading, and integrating systems for the energy area that implemented the Elipse applications in this project. Now, due to this app, operating the plants no longer requires the physical presence of users at the IOC.

In addition to the app for smartphones and tablets, CPFL Renováveis uses two other technologies from Automalógica that strengthen its control of the plants. The first one is a georeferenced solution, which helps take the maintenance team to the precise spot where the failure took place. The second one is called tabular; this system allows visualizing all points in a selected area (a substation, a device, a specific gap).  With it, it’s possible to create alarms hierarchies and to monitor large amounts of devices spread around any area with no loss in details.