Enel Green Power is a company inside the Enel Group, responsible for developing and managing power generated from renewable resources worldwide. Present across five continents in 29 countries, it has a managed capacity of over 46 GW and more than 1,200 power plants (solar, wind, hydroelectric, and geothermal). In their automation project for 23 renewable generation plants in Brazil (nine hydropower stations, eight wind farms, and six solar plants), the company has opted for Elipse E3 and Elipse Power Renewable, solutions developed by Elipse Software that were implemented by their partner Automalógica Sistemas para Automação. 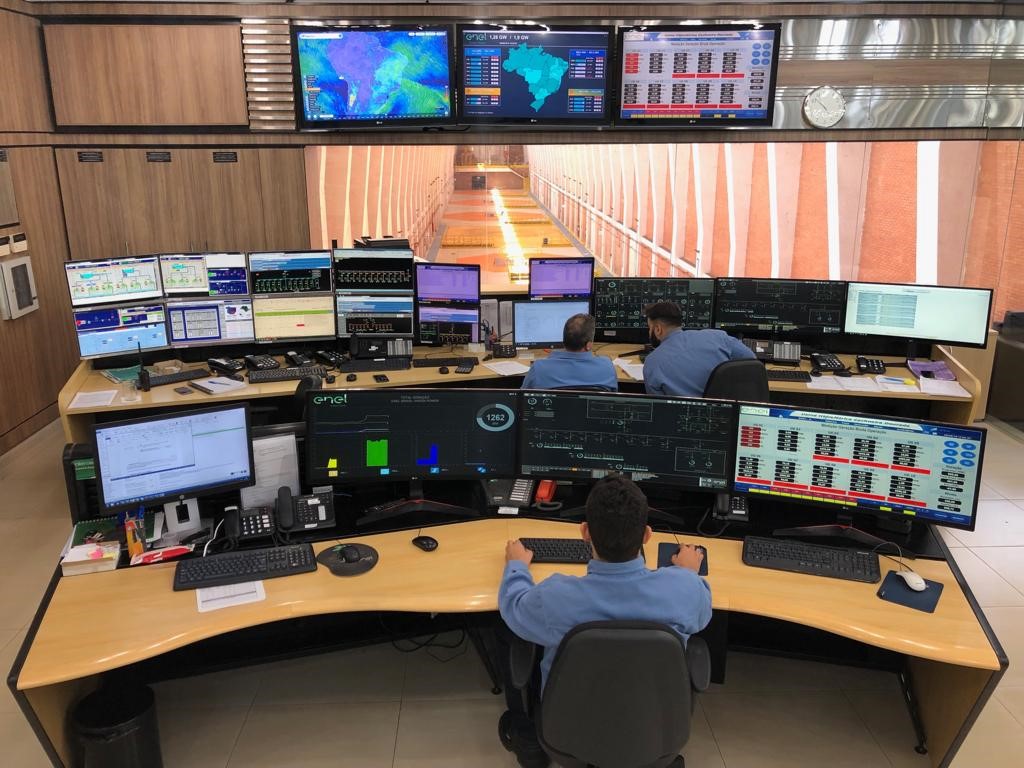 With Elipse Power Renewable, Enel is able to monitor all electrical quantities of power, current, voltage, and frequency measured at each hydropower plant’s generator; on the software screen, these plants are represented by spheres, which are filled with the data corresponding to real-time production. To facilitate this control, the application displays intuitive, friendly screens, which are customized for each plant according to the variables to be monitored on them. 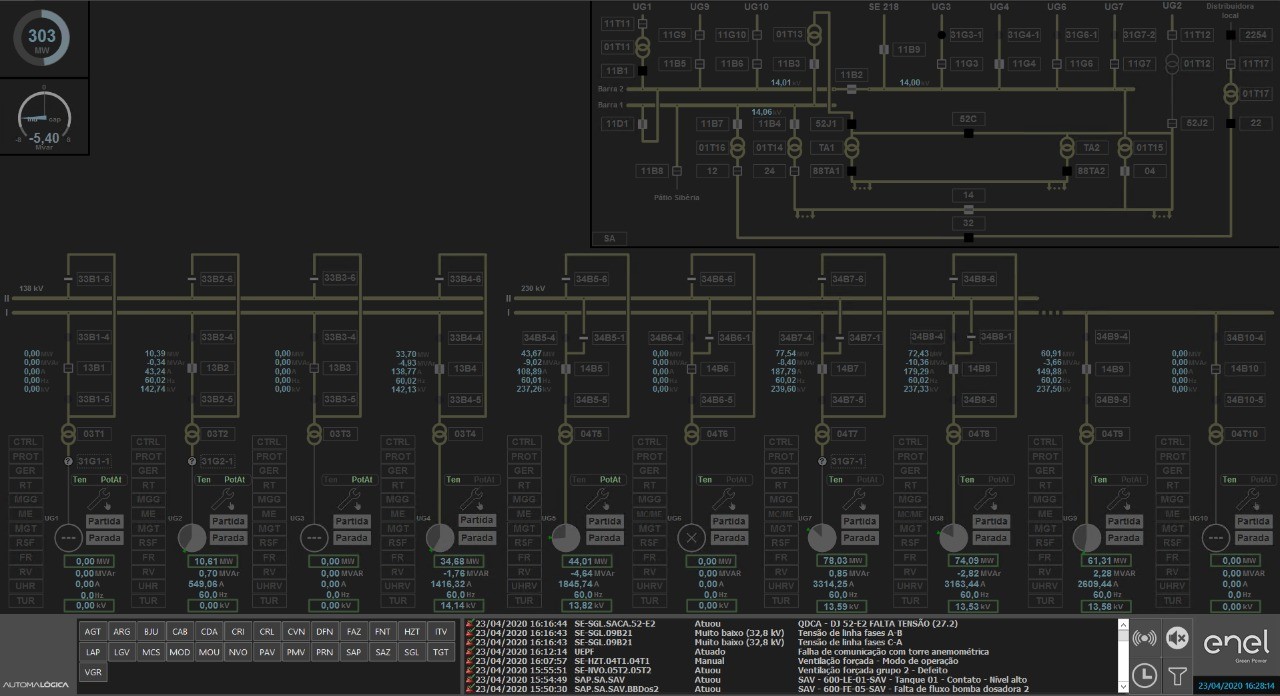 The current condition of generators, turbines, breakers, sectionalizers, and transformers are also monitored by the Elipse software, both in general damming and in the plant’s support services (generators can be turned on/off, breakers can be opened/closed). Additionally, Elipse Power Renewable also allows controlling, on the side, the damming of support systems.

In order to reinforce this control, the software features an alarms system that alerts the maintenance team, so that they can diagnose and fix issues more rapidly and safely. The severity level of alarms is associated to different colors: yellow (low), orange (medium), and red (high).

In addition to the plant’s control, Elipse Power Renewable allows monitoring each generator unity separately, displaying the turbine’s rotation speed and the stators’ and skids’ temperature. The pressure values retrieved from the water in the general cooling system, from the turbines’ speed regulation hydraulic unit, and from the braking compressed air system, as well as the assigned levels in water taking (upstream and downstream) and the oil tanks for lubrication, are also supervised. 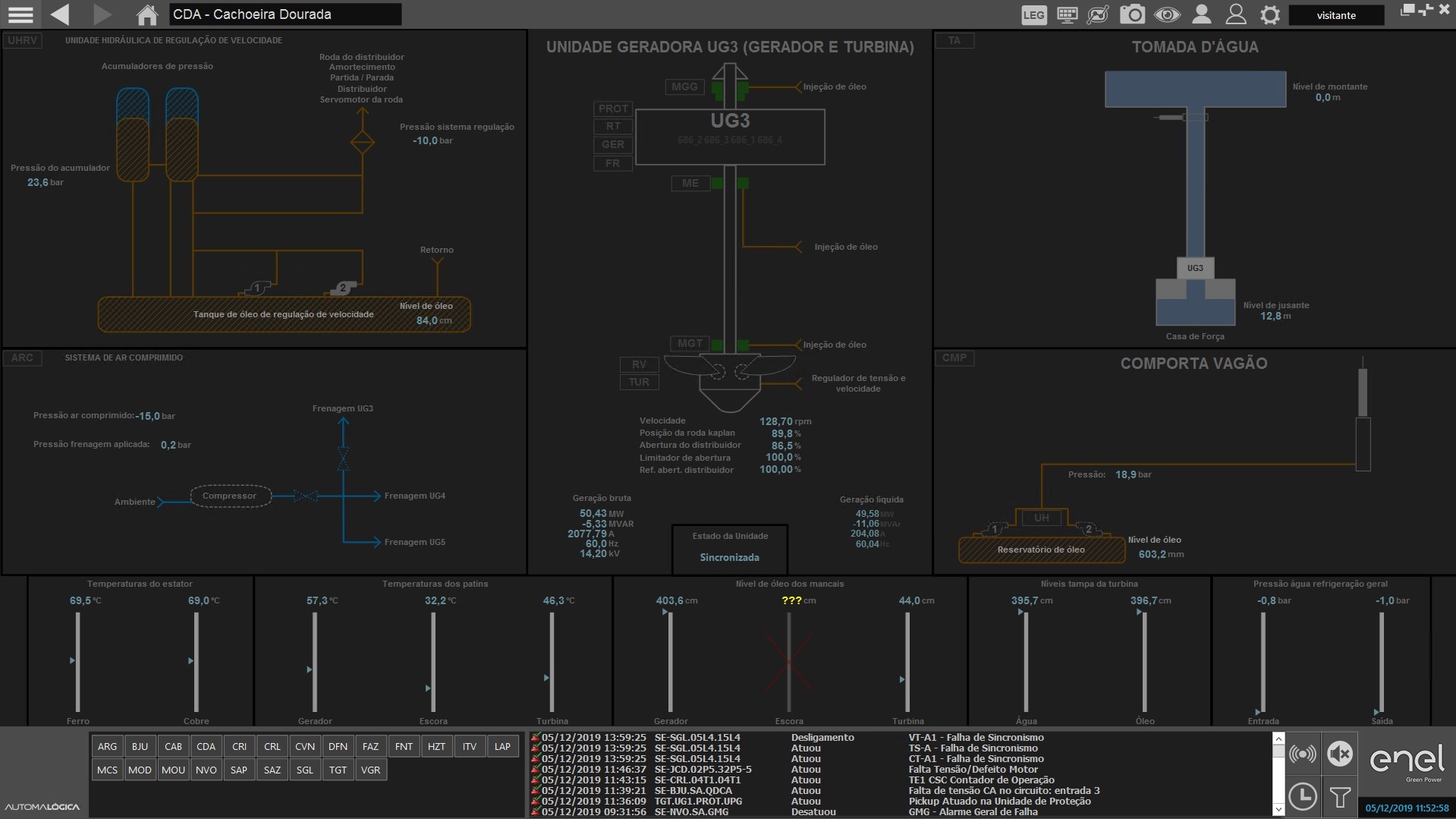 In wind power applications, Elipse Power Renewable monitors the plants’ active and apparent power, output capacity, wind speed, and the number of wind turbines that are in communication, available, and working. The solution also displays the amount of energy each wind turbine is producing, showing the active an reactive power being generated in each farm. Additionally, it shows where each wind farm connects to the damming through which the energy is transmitted and, similarly to what happens with the automation in hydropower plants, lists all alarms on the screen’s lower side.

Elipse Power Renewable also allows monitoring each turbine in the wind park individually. To do so, just click the object that stands for it on screen, and a pop-up window will open with more information about its alarms, room temperature, rotors and transformers temperature, wind speed, voltage, active and reactive power, current, network frequency, and nacelle angle. In addition, the solution allows monitoring the power curve, which is measured according to wind intensity in the last 24 hours. 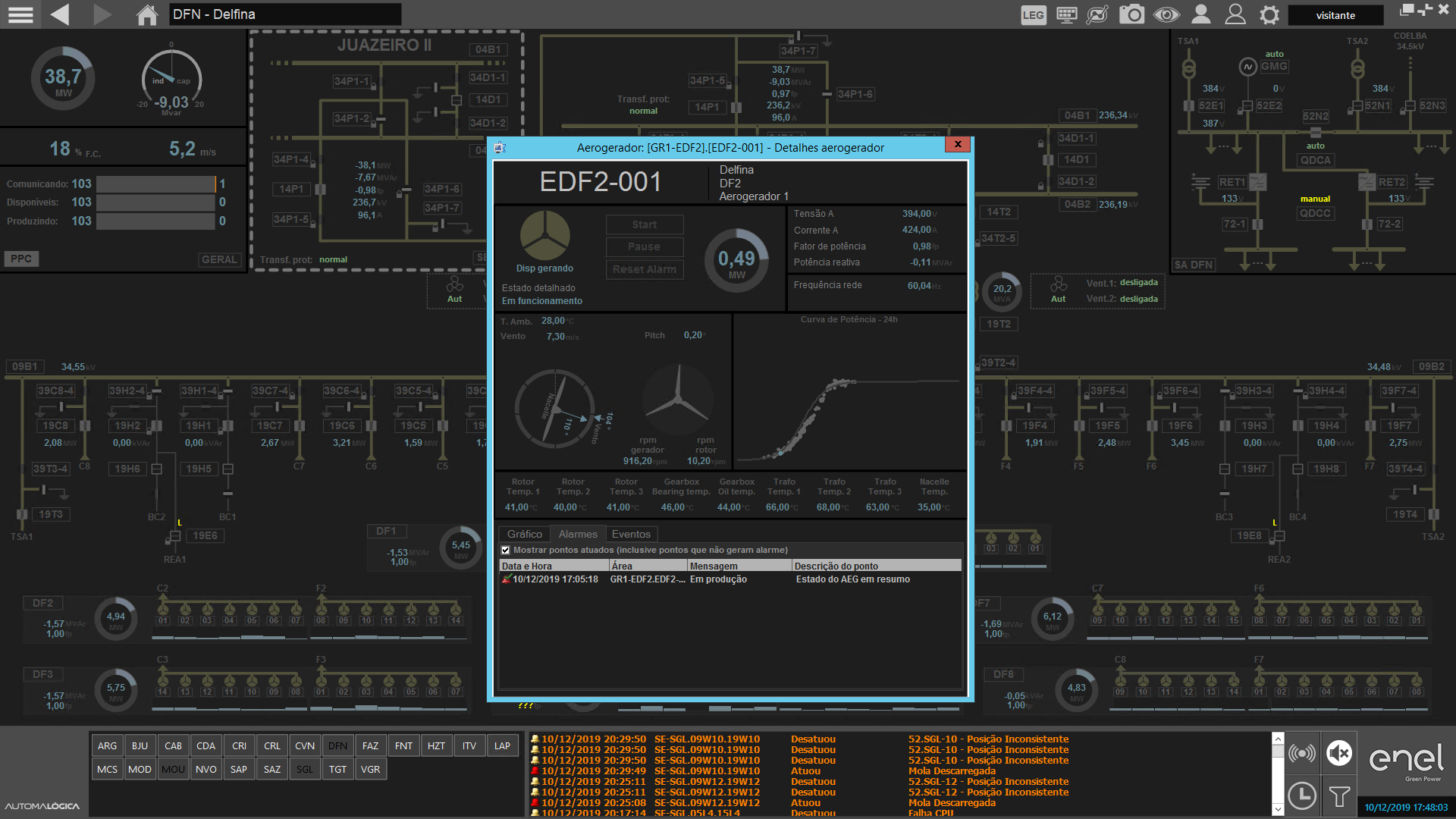 Finally, Elipse Power Renewable also allows controlling the farm’s dispatched power either collectively or individually. Collectively, the power set sent by the operator is distributed on all units automatically. Individually, the power in each turbine can be configured, as long as the machine’s operation limits are respected. 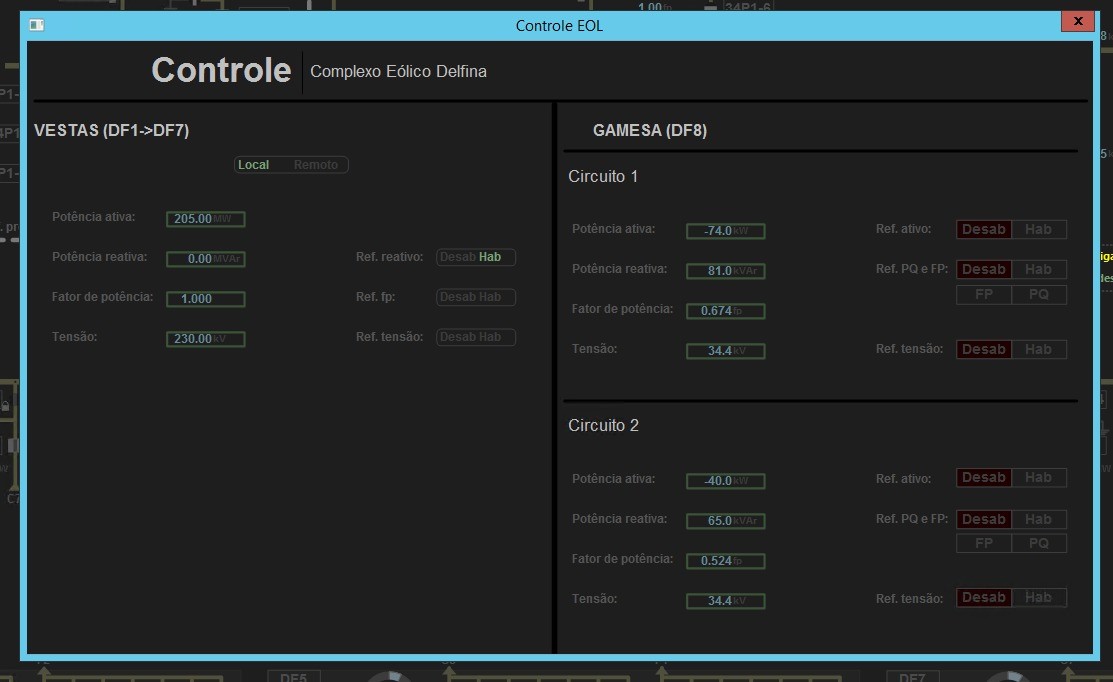 Elipse Power Renewable was also chosen by Enel to monitor and control six of their solar power plants. With the software, it’s possible to monitor each plant’s active and reactive power, as well as its irradiation, wind speed, solar position, and the amount of available, active inverters. Inverters are devices that convert the power generated at the panels from direct current (DC) into alternate current (AC) for transmission. 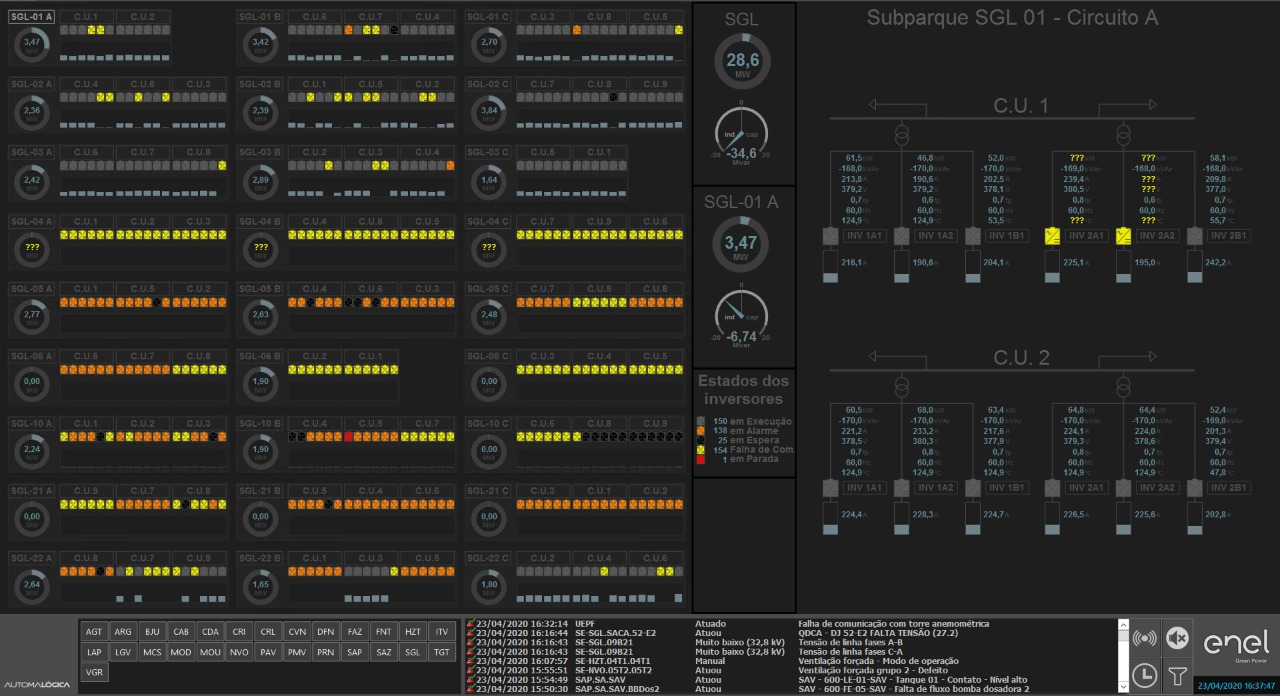 Controlling 27 inverters on a single screen

With this platform, it’s possible to supervise the power from a large number of converters on only a few screens. It’s also possible to monitor and adjust the power being generated. On another screen, Elipse E3 shows where Enel plants are located in a map of Brazil. The screen can also be used for monitoring the power that can be generated as well as the power actually being generated by the plants. 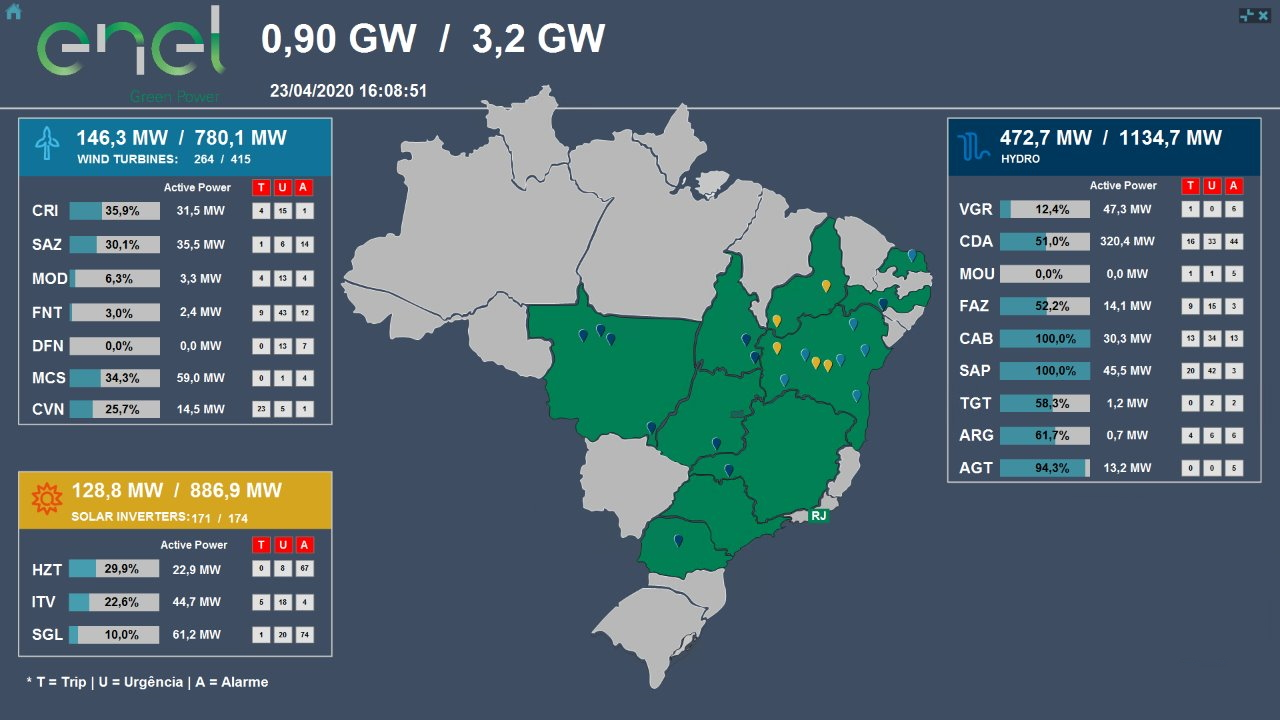 Map of Brazil, displaying the location for all Enel plants

According to Tetiana Guimarães dos Santos Reis, Enel Green Power’s electrical engineer with a Master’s degree in IEC-61850, the company has opted for Elipse Software especially due to its IEC-61850 driver, which is DNV-GL internationally certified. This certificate represents the highest level expertise and reliability in electric systems automation, and meets all the requirements demanded by IEC-61850 electric standard.

Another key factor for choosing Elipse was its technical support service, which can be easily accessed nationwide. The fact that Elipse solutions can expand pre-existing applications without requiring major alterations was also considered in Enel’s decision.

This happens because they are compatible with equipment from different vendors, which helps maintain a recognizable identity for the whole interface. An example of this is the expansion project for São Gonçalo solar station, which was finalized with no great changes to older applications, such as the one at Ituverava station.

According to Enel, the new enterprise will increase the plant’s total capacity in 613 MW.  Altogether, nearly US$ 81 million were invested in building what is currently regarded as the largest photovoltaic plant in South America. When fully operational, the park’s expansion will be responsible for generating 360 GWh per year, thus avoiding the emission of around 207,000 tons of carbon dioxide in the atmosphere.

Check out the list below for other important benefits obtained by Enel Green Power with the Elipse solutions as they were pointed out by Alexandre Mello, the electrical engineer responsible for the company’s control room: