Established in 1970, Clemar Engineering Ltd. stands out in the Brazilian scenario for their comprehensive engineering solutions, which obey rigorous quality standards and focus on overall client satisfaction. Headquartered in Florianópolis, it has an industrial unit in the neighboring city of Palhoça and a technical/commercial office in Joinville, all of them in Santa Catarina state, South of Brazil. It also has branches in 14 different Brazilian states, such as São Paulo and Rio de Janeiro.

A great supporter of clean energy, Clemar’s social responsibility actions focus on the environment and well-being of local communities. Because of that, the company has decided to install two photovoltaic plants, one in Florianópolis and another one in Palhoça.

In order to monitor the performance in these plants, Clemar has opted for Elipse E3. Developed by Elipse Software, a global software developer specialized in process automation solutions, Elipse E3 can record and query Microsoft SQL Server databases and provide the plants’ operational and management data for visualization via charts. This feature, alongside its ability to communicate with devices from several different vendors, was decisive for Clemar’s choice of automation system.

Installed in December 2016, the 7000-square-foot Palhoça plant can generate up 55kWh. It comprises 12 strings with 21 modules each, which make up a total of 252 (two hundred and fifty two) 255Wp Heckert Solar modules. It also has two TRIO-27,6 ABB inverters, each capable of generating 27.6kW and convert the continuous energy generated by the photovoltaic modules into alternating energy, which is used by the final customer in homes and corporations and is supplied by the state’s power distribution company, Celesc. 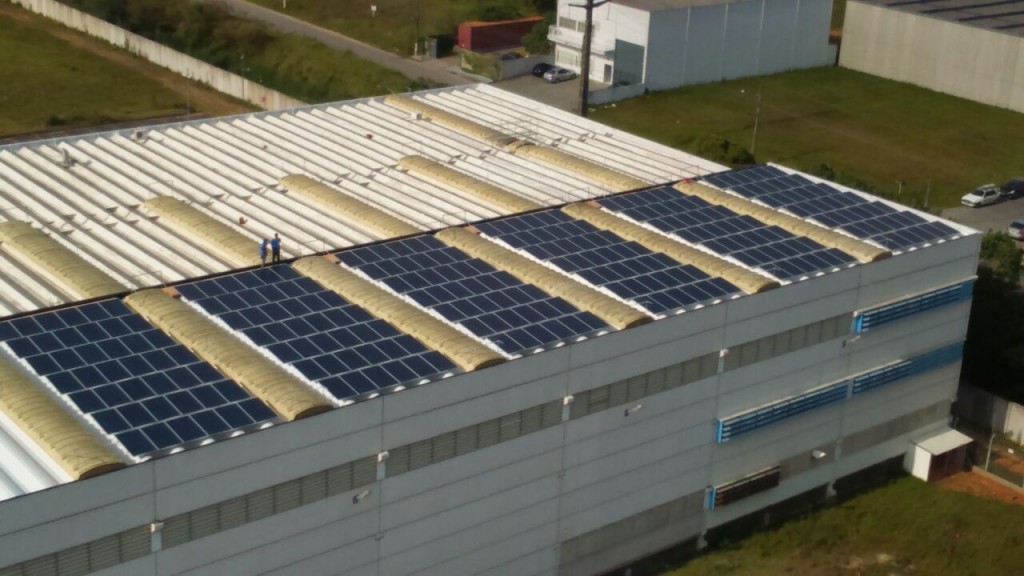 The 5050-square-foot Florianópolis solar plant was built approximately two months after, in February 2017, and can generate up to 50kWh. It comprises 12 strings with 20 modules each which make a total of 240 (two hundred and fourty) 260Wp Canadian Solar modules. Similarly to the Palhoça plant, it also has two inverters, but from SMA/WEG. Imported from Germany, the photovoltaic modules from both plants are made of polycrystalline silicon, which is a cost effective material highly indicated for renewable energy sources.

An important factor in this case is the short period of time required for building photovoltaic plants: Since the sun is their sole source of energy, this type of plants can be erected in less than 6 months. In this case specifically, Clemar was able to build each plant three months after the project has been designed and the equipment has been purchased.

With Elipse E3, Clemar Engineering can monitor the real-time energy being generated by the plants in kW and kWh, as well as all the energy generated from the beginning of the operation. It allows supervising the strings’ performance variables and displaying the percentage of energy being produced versus their full capacity. The quantities regarding Celesc’s energy supply to the plants’ main distribution board are also supervised by the software, as well as the inverters’ statuses. 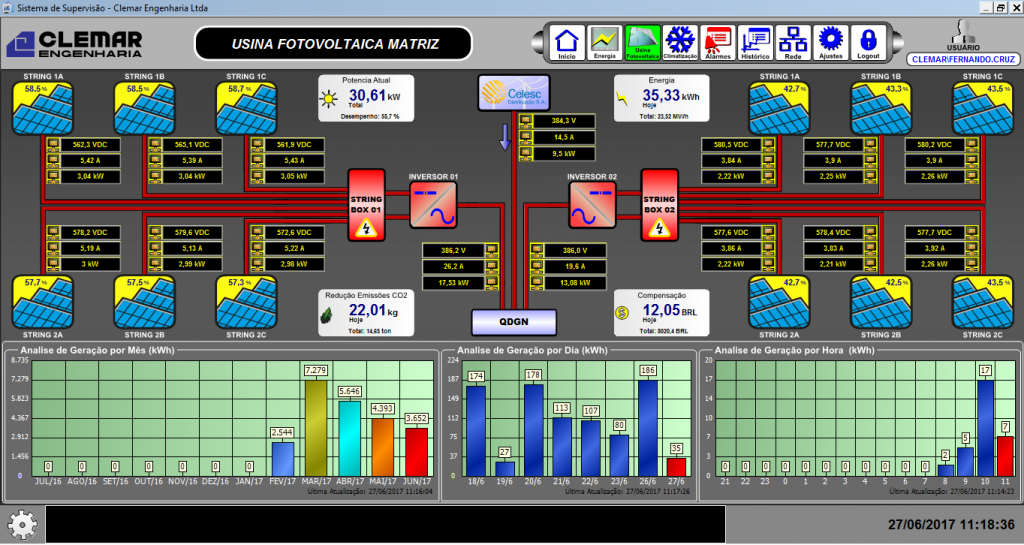 The Elipse E3 system also allows the graphic analysis of the amount of energy generated in the latest months, days, and hours. Additionally, the software also monitors the current month’s “energy credit”, that is, the energy surplus. Thanks to the distributed generation system (Grid-tie) created by the Brazilian Electricity Regulatory Agency (Aneel) in 2015, Clemar is able to work in a compensation regime with Celesc in order to share this surplus with the network and thus be financially compensated in its energy bill. To reinforce this control, the software displays the value being saved in the local currency; this value will be deducted from the next bill. 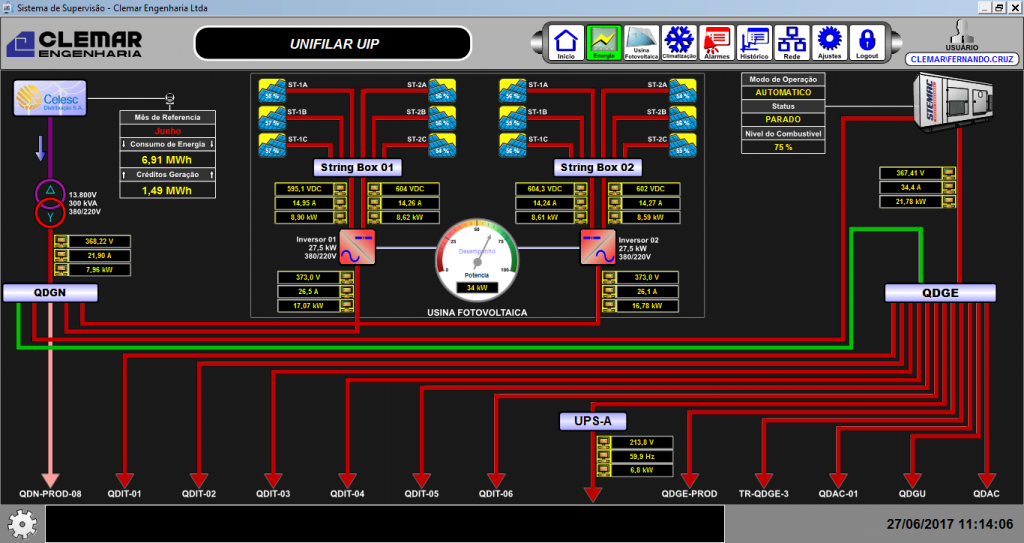 The software also monitors the CO2 factor, that is, the amount of CO2 per kWh that will NOT be released in the atmosphere due to the clean energy produced by the solar plants, both in real time and the altogether volume since the beginning of these operations. It also features an alarm system that will notify Celesc via SMS on any type of anomaly detected in the operation. Finally, the solution also projects the amount of energy to be generated in the following months. 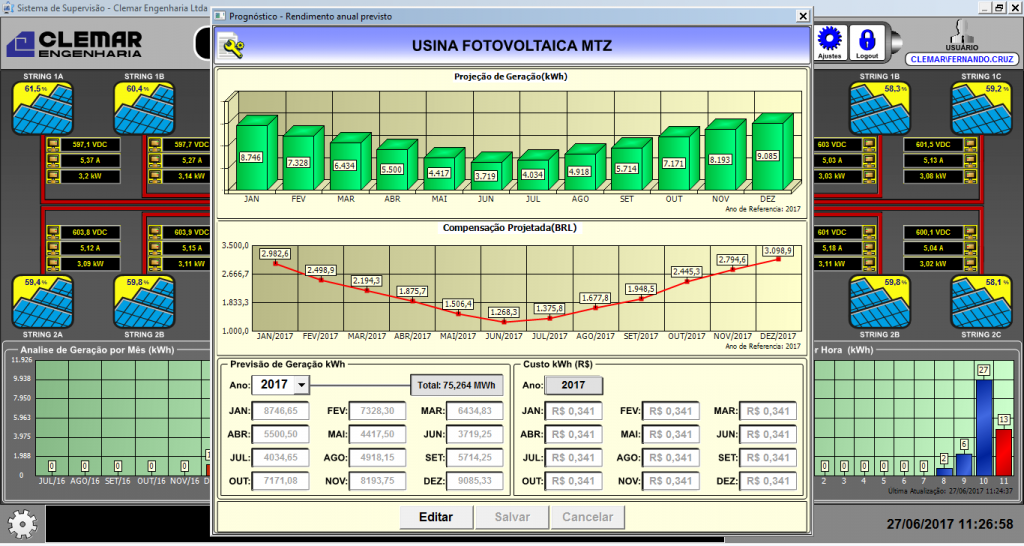 To ensure this control, the software communicates with different devices and meters installed in the plants via VPN, the provider’s dedicated network. Thanks to this structure, the Elipse E3 can be accessed in any computer at Clemar via login and password, regardless of its location. In addition to controlling the plants, the software also controls other aspects at Clemar’s offices, such as lights, air conditioning, and the data center, among others. 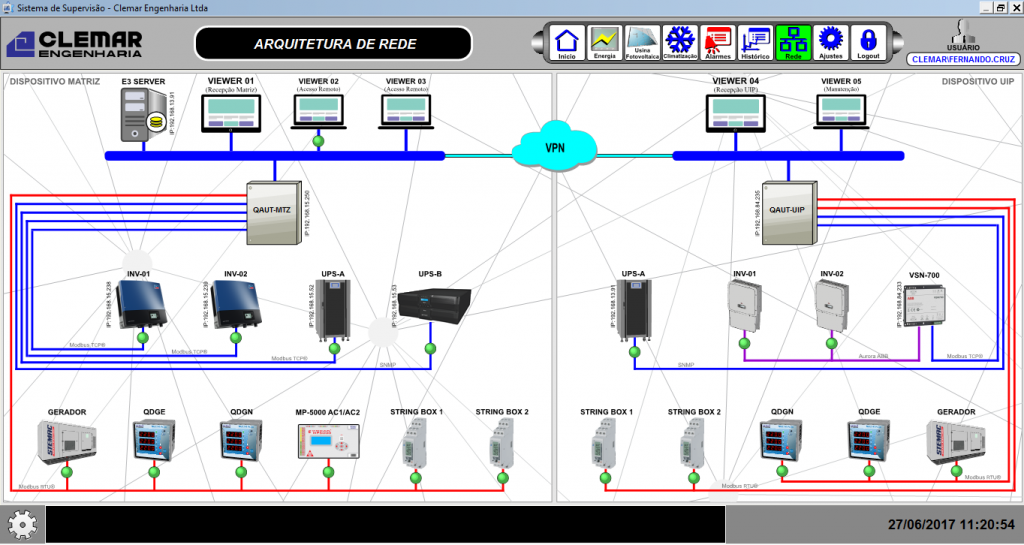 According to Fernando Bolwerk Cruz, Clemar’s Electrical Engineer, the new photovoltaic plants have represented a significant reduction in costs for the company, not only because of their renewable energy sources, but also because of the automation and control provided by Elipse E3. However, Mr. Cruz points out, solar energy is still not very popular in the country.

“In Brazil, there are still many obstacles for using this type of energy. Even though the country has great potential for this, the technology for building these plants is still rather expensive when compared to the technology for non-renewable energy plants. Additionally, silicon is still produced in small scale here,” he said.

Among the main benefits Elipse E3 has brought to Clemar, we highlight the following: