Data provided by Elipse Software’s platform acknowledges any differences between volume in tanks and consumption in ships, which can point to fuel deviation, a fairly common occurrence with this type of operation

For the past 35 years, the Maguari River Shipyard has been a reference  in shipbuilding in the Amazon, with profound links with the region’s sustainable development. Located in the Icoaraci district, in Belém, the company has privileged access to supply raw materials to both national and international markets.

With highly automated levels for building metal structures and boiler shops, Maguari stands out as one of the largest, most modern shipyards in the Amazon, acting as the Brazilian leader in the production of tugboats and pushers. Due to its pioneering attitude that focus on implementing innovative technologies, the Maguari River Shipyard has opted for Elipse Software for its great ability to integrate with different technologies. 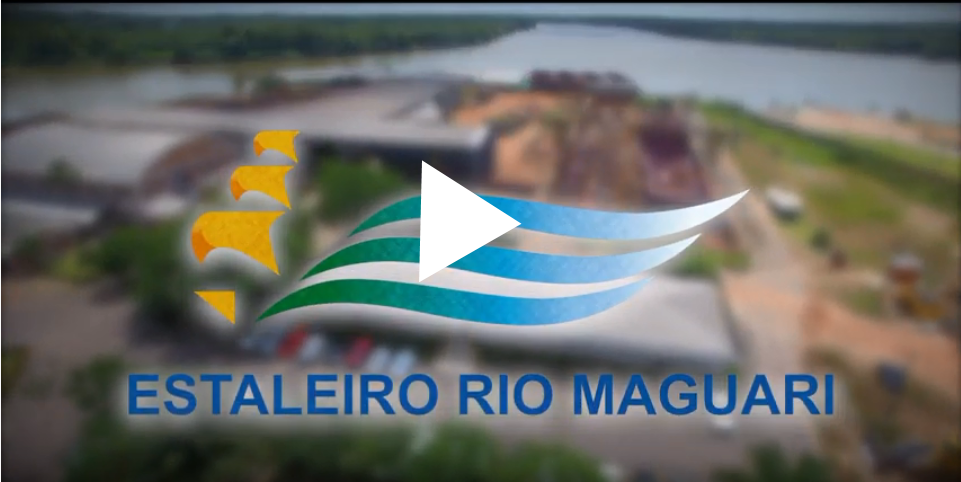 Created by Elipse Software, a global software developer specialized in solutions for real-time management of industrial processes, Elipse E3 was the technology chosen for monitoring and analyzing data collected by the subsystems, devices, and engines in five different pushers at the Maguari River Shipyard. The platform collects and provides an ample basis for managing this operation, in addition to being essential for maintaining assets. E3 Server integrates four distinct networks for monitoring data generated by machines/vessel navigation systems, making them available via an SQL Server Database. The company responsible for implementing the application of this new marine automation platform was Primetech.

Via Elipse E3, operators can monitor both water’s and diesel fuel’s outflow, level, temperature, and density in the pushers’ tanks. When controlling diesel, the operator is able to spot inconsistencies in the fuel’s use, as well as the most effective ways to employ it. Thus, they can better check for deviations along the way, which are fairly common in this type of operation. During soy crop and harvest periods, when the demand for this service is higher, this control can generate savings of 7200 L/month and 86400 L/year, with nearly US$ 60,000 return for each ship. 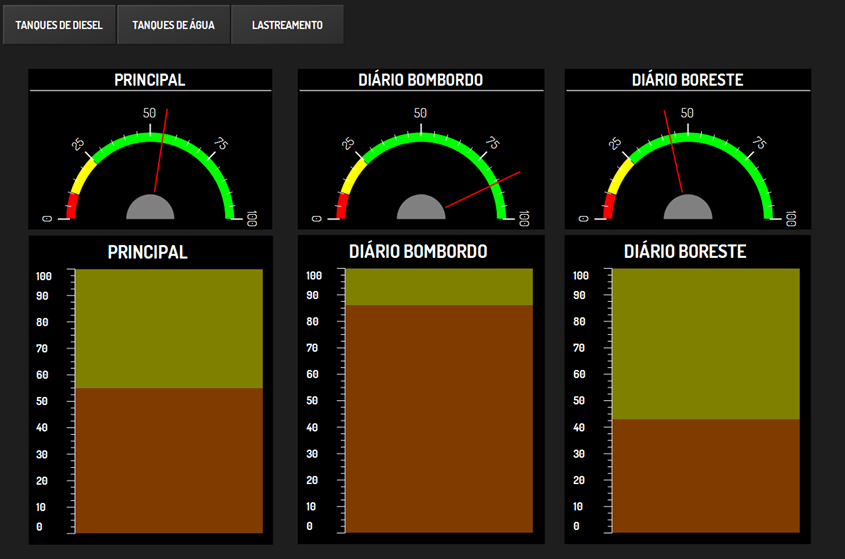 When controlling water, operators can check if pushers are properly balanced during navigation, both from the sides (port side/starboard side) and from length (bow/stern). The water, in this case, is tipping the scales so the diesel oil’s weight won’t sink the ship from where it is stored. To keep that from happening, water is stored in the opposite side, thus ensuring the ship is properly balanced and therefore wastes less fuel during navigation. 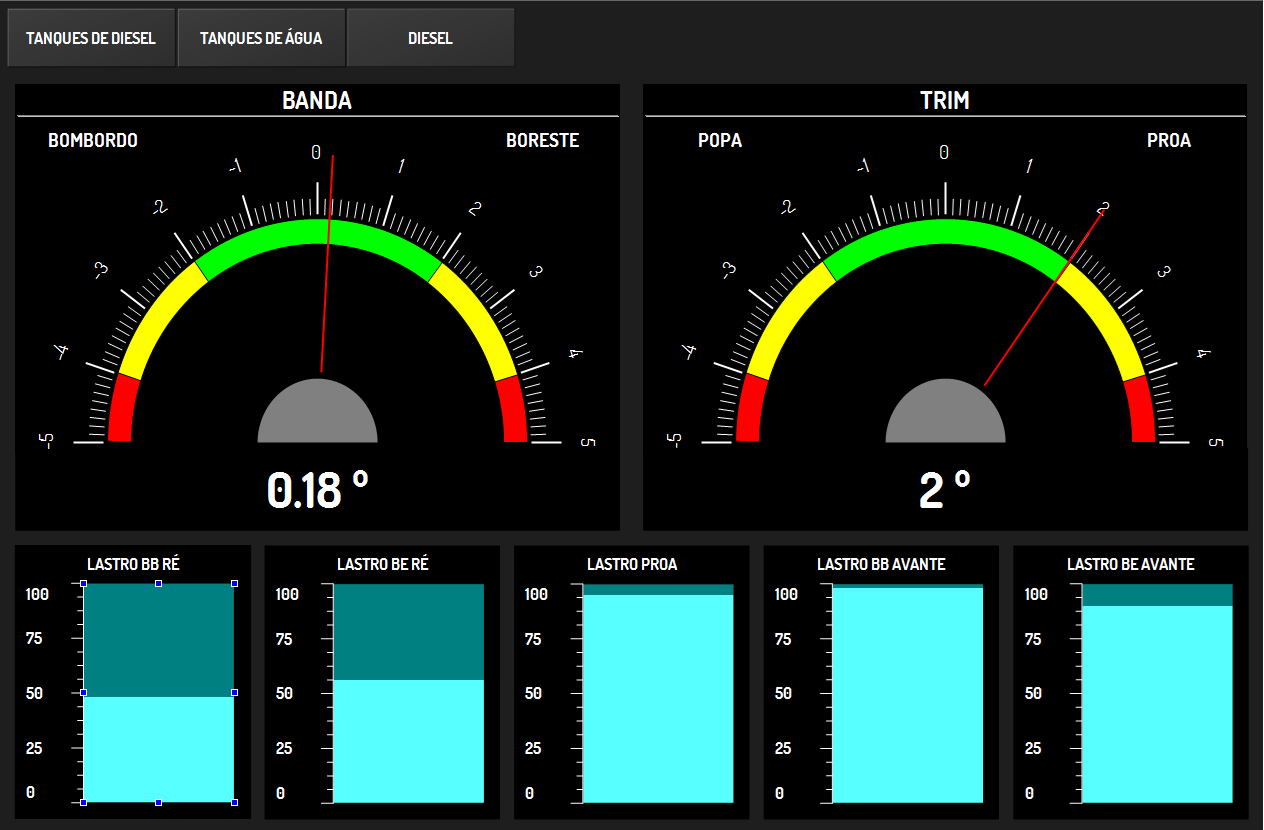 Controlling the pusher’s balance; in this case, it’s tipping to the stern

The pushers’ propulsion system’s engines are also monitored by the Elipse software. On a screen, operators can access rotation (RPM), load factor (torque), lubricant oil pressure, fuel pressure, cooling temperature, and temperature in the air circulating in the engine. Additionally, Elipse E3 also allows checking the average fuel consumption (in L/h), working time (Hobbs meter), and whether alarms are next to each engine. 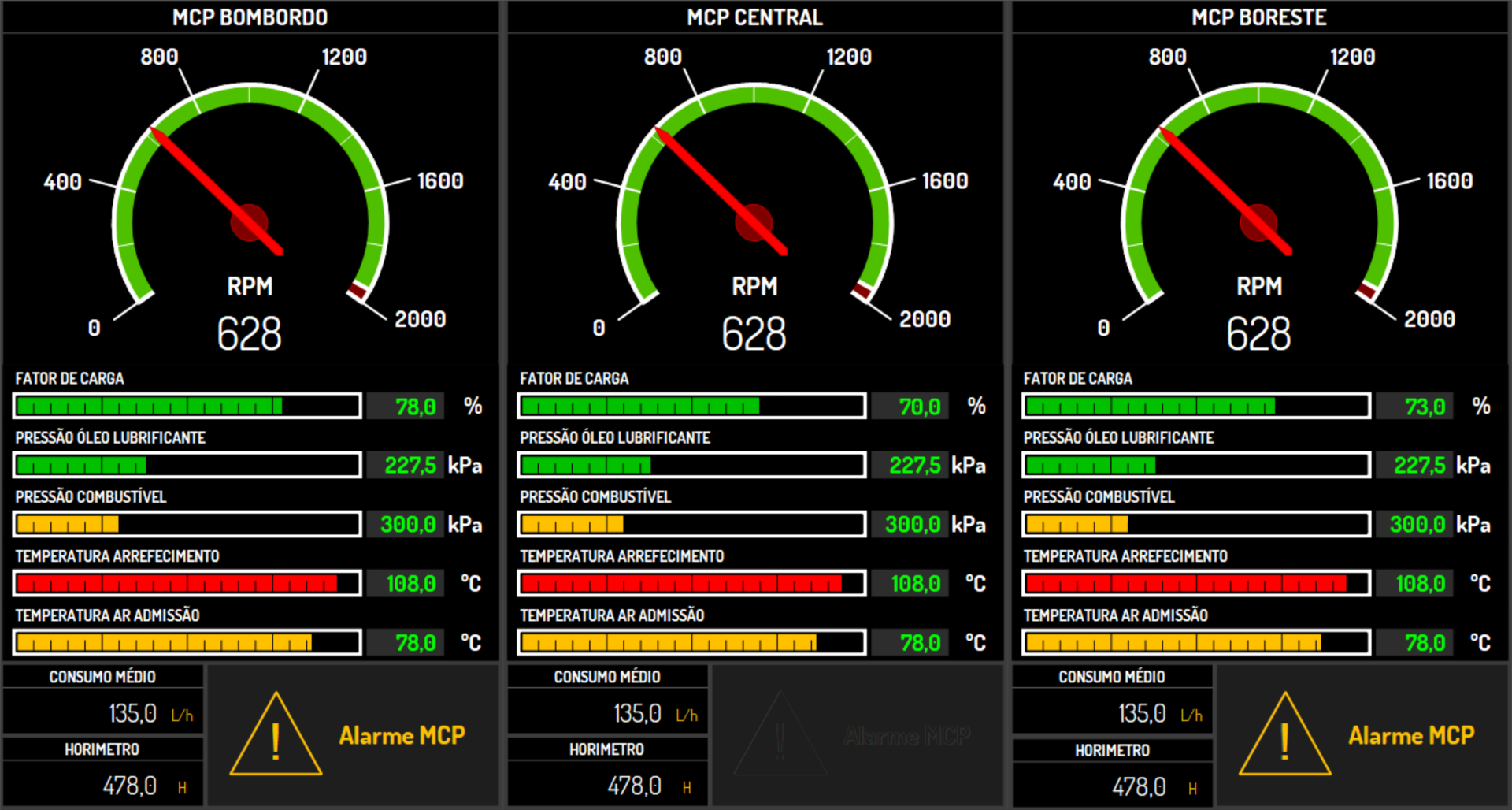 The electric system in the ships is also controlled by the software. Via a single-line diagram, Elipse E3 allows monitoring generators, electric boards, transformers, rectifiers, and breakers, in order to report if devices, such as compressors, fans, exhaust fans, pumps, and winches are being energized via generators or GP (Ground Power). 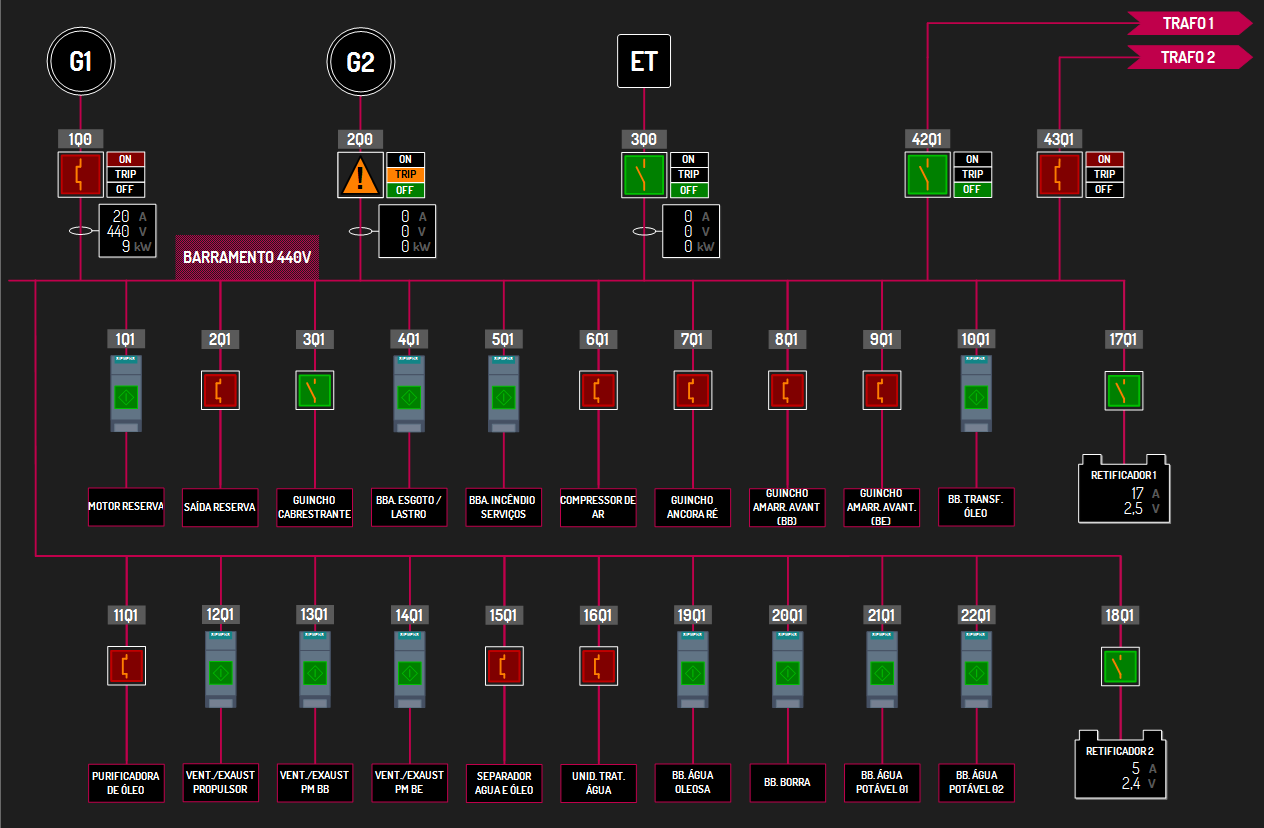 Operators can also monitor the navigation system via GPS read (Location), AIS (Collision Risk), Ecoprobe (Depth) and Speedlog (Speed and Distance Covered). To ensure the crew’s safety, Elipse E3 displays a screen that maps the pusher’s deck; spots in red indicate any fire occurrences. The software also activates an alarm in the event of any trespassers in the ship. 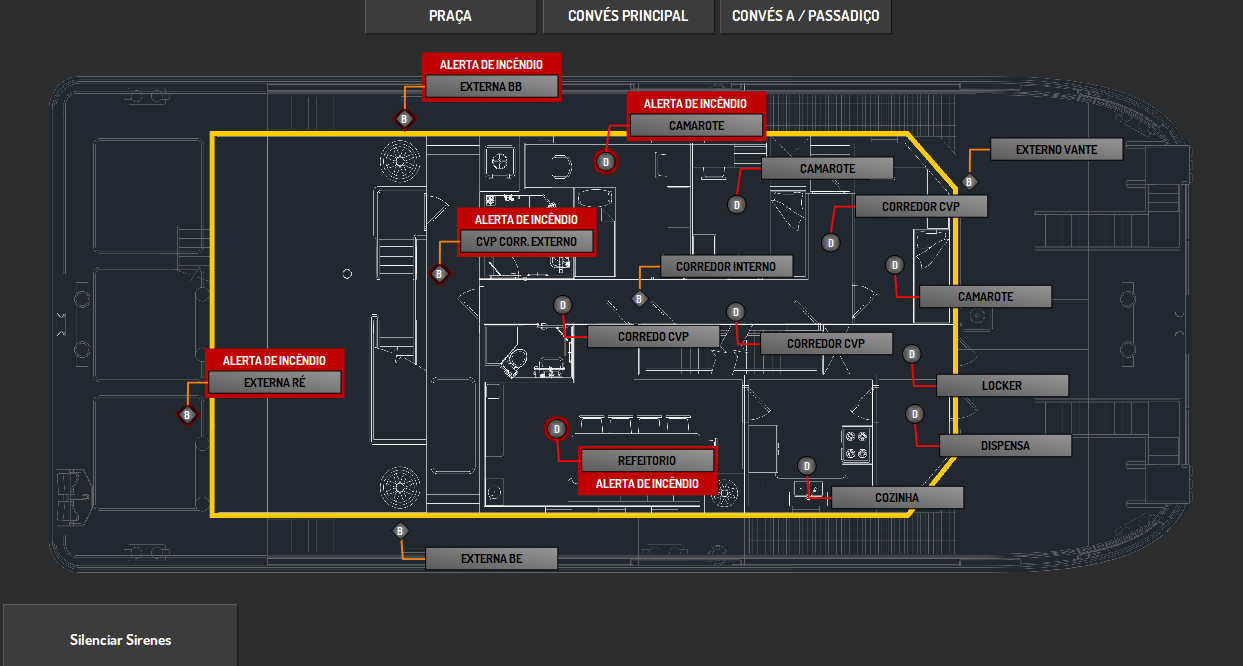 Finally, Elipse E3 can issue reports exportable via Excel in order to analyze trends. All information on the engines, fuel, alarms, and other devices and monitored systems are reported, and these accounts are later used for any auditing purposes.

According to Fábio Vasconcelos, commercial director of Maguari River Shipyard, one of the main benefits the company took into account when opting for Elipse E3 was the fact that it was developed by a local team, which means it can be updated, repaired, or customized very quickly.

“The main advantage of this system is that it was developed locally, requiring no trips from foreign professionals in order to update it or to train its users,” he said.

Other features pointed out by Vasconcelos are the software’s reliability, user friendliness, and the technical support provided by Elipse.

“We’re talking about a system that is highly dependable, easy to use, and whose support is quickly available whenever we need it,” he said.

Check out the list below for other important benefits obtained by Maguari River Shipyard with Elipse E3: