Launched in 2001 as a more robust SCADA (Supervisory Control and Data Acquisition) platform, featuring resources for large-scale applications, Elipse E3 is turning 20 this year. Leader in the Brazilian market of processes supervision and control systems, the software is currently Elipse Software‘s best seller, responding for more than 50% of the company’s total income.

Throughout its successful story, Elipse E3 has undergone several tests and transformations; due to its flexibility, connectivity, and easiness of operation, it was employed in diverse types of applications, from simple HMI interfaces to complex operations center. It all started by mid-1997/1998, when the company was faced with a dilema: should they develop a new SCADA software (the “dream version”), or focus on improving Elipse SCADA, which at the time was the company’s main product?

Elipse 21 DOS screen, the company’s first product, next to an Elipse E3 screen developed according to ISA 101 standard (High Performance)

However, when listing all the features required by the new solution, Alexandre Balestrin Corrêa and Flávio Englert, Elipse’s current development and technology directors, realized that it would take them around two years to come up with the new product.  Due to these circunstancies, in January 1999, the team, headed by Ricardo Haetinger, Elipse’s current director-president, decided to abort mission and focus on improving Elipse SCADA. Fortunately for Elipse E3, a new meeting took place less than 24 hours later, and at it, Corrêa and Englert were able to convince the whole staff that, with a joint effort, the new solution could be developed in a shorter time.

“It was a risky bet, because it would be easier to keep investing in Elipse SCADA rather than in a new product; however, betting in Elipse E3 proved, in time, to be the key decision we took to achieve what we have now,” says Haetinger about that crucial time in Elipse’s history.

In order to accomplish this task, Corrêa and Englert were first helped by Cristian Kohlmann, who’s currently the development manager of Elipse Plant Manager (EPM), the company’s PIMS solution. Soon after that, Luciano Ricardo Maciel Silva and Thiago Rosso Adams, Elipse’s current programmers, joined Kohlmann in a real task force to launch Elipse E3 as soon as possible. The trio was responsible for releasing the software’s earlier version, in 2001. A pivotal role was also played by Rafael Farina, Elipse’s current IT manager, who by then took on all tasks related to Elipse SCADA so that the trio could focus solely on developing Elipse E3.

Soon after being released, Elipse’s new product was already being employed in a rather complex pilot-project by Elektro, one of Brazil’s largest electricity distribution company. According to João de Souza Júnior, the technician responsible for implementing all Elektro’s automation systems at the time, the project’s goal was to replace eight regional centers installed in São Paulo state with a single central in Campinas. Thus, the company was able to have centralized control of over 120 electric substations.

As they had previously been using Elipse SCADA in regional stations, Elipse E3 was the SCADA solution adopted at the new control center, whose communication with other equipment and automation systems took place via satellite. Both Elipse E3 and satellite communication had never been employed in Brazil before, which made this project even more complex, according to Souza Júnior.

“We were the first Brazilian company to carry out the whole communication for substations control via satellite. As soon as this project was developed, we didn’t think twice about choosing Elipse for our partner. This challenge required all our efforts into adapting to E3 and all equipment. By the end, thanks also to the software’s great connectivity and flexibility, the project was a success,” he said.

During this period at Elektro, the Elipse staff worked in a joint effort to, among other things, exchange all the old application screens made with Elipse SCADA for new ones developed with Elipse E3. And since it was a large automation system, these changes had to be made with the application still running; Elipse developers spared no efforts to accomplish this while causing as little impact to the running application as possible.

“We felt like we built a plane mid-flight,” says Marcelo Salvador, Elipse’s current business director. He, alongside Gustavo Salomão, Elipse São Paulo’s current manager, was part of the joint effort to install the new system. 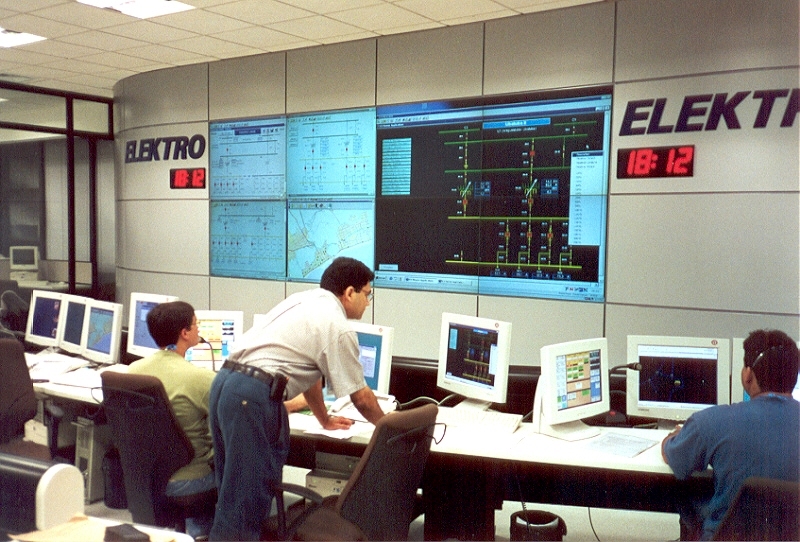 Elektro’s operations center when Elipse E3 was implemented in 2001

Once this first challenge was accomplished, Elipse E3 became the top product not only of Elipse Software, but also of the Brazilian market of SCADA systems. This is evidenced by several success cases by Elipse involving renowned clients such as Elektro, CPFL, Cemar, Enel, Engie, Light, SuperVia, Sabesp, Petrobras, Itaú, CCR Group, Votorantim, Bunge, Unimed, STIHL, and Globo TV, among others.

Erivaldo da Rosa Lima is a wastewater systems technician at Sabesp, a Brazilian water and waste management company owned by the state of São Paulo. He has used Elipse solutions since 1997; as soon as he learned about Elipse E3, Lima wasted no time employing it as the control system for boosters, lift stations, and water treatment of the company’s East Metropolitan (EM) unit. The software also allows them to monitor wastewater collection in order to avoid pollution in the whole EM area, in São Paulo.

“With Elipse E3, we are able to control the boosters’ pressure parameters 24/7, remotely and in real time, which reduces water loss in 15% and energy consumption in 20%,” says Lima.

According to him, the software was very important in times of water crisis, as well as during the 2014 World Cup, when it provided water distribution very efficiently to Neo Química Arena; the stadium received six matches in the tournament altogether, including the opening match between Brazil x Croatia and the semifinal between The Netherlands x Argentina.

“And during the pandemic, we’ve got yet another benefit from Elipse E3: We were able to follow all processes remotely, that is, outside Sabesp’s environment,” he added.

For 20 years, the software has been an important tool for several integrators, companies that partner up with Elipse to help develop applications to its clients. In 2001, Evandro Pavei Piucco, currently the operations manager at Procer Technologies for Grains Storage, was one of the first integrators to use Elipse E3 in an application for Bungee Food Company in Luis Eduardo Magalhães, in the state of Bahia. Ever since, Piucco has witnessed several major developments in the software, especially its robustness and fast communication.

“Today, I wouldn’t trade Elipse E3 for any other SCADA solution out there,” he said.

And just like all Elipse platforms, Elipse E3 is constantly being updated to better meet the needs of its users. “In the future, the idea is having the platform run on the cloud and being accessed via web,” says the company’s technology director, Flávio Englert.

“For 20 years, our team has never stopped trimming the software, with constant improvements, updates, and new adjustments. Elipse E3 still feels as alive as ever, never stale, never behind its time,” he added.

Elipse Software develops powerful software tools, such as Elipse E3, aimed at real-time management of industrial processes, energy, wastewater, and infrastructure, integrating all these systems into a single architecture that is able to turn data into strategic information. In the energy area, Elipse E3 and Elipse Power platforms are used in the control systems of over 50% of the power plants in Brazil. As a player in the automation market for the past 35 years, the company’s goal is to provide as many options as possible, thus ensuring high-performance communication and connectivity.

Headquartered in Porto Alegre, in the South of Brazil, Elipse has other four branches in the country: São Paulo, Curitiba, Belo Horizonte and Rio de Janeiro. To better meet the needs of its international market, the company has a branch in Taiwan, and also operations in the USA, Germany, India, Argentina, Chile, Peru, China, Thailand, Singapore, Portugal and Vietnam, among others. Currently, there are thousands of copies of Elipse’s products installed worldwide, which evidences the high quality and performance of its products.

For further information, go to https://www.elipse.com.br/en/.